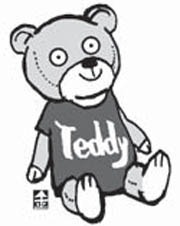 It has been one week since he passed away. However, the last time I saw him was six months ago, when he was readmitted to the hospital.

I am a little teddy bear, who lives in a bedroom in the bishop’s residence in Hyehwa-dong, central Seoul.

People who saw a photograph of the late Cardinal Kim Sou-hwan’s bedroom might recall seeing me sitting at the head of his bed.

Let me introduce myself.

I am a white, furry stuffed animal, filled with cotton and cloth. It was about 100 years ago when we bear dolls became familiar to everyone.

Theodore Roosevelt, the 26th president of the United States, went hunting one November day in 1902 but failed to shoot anything. His entourage brought him a baby bear and suggested he shoot it.

Roosevelt refused, let it loose and said, “It is against the spirit of fair play.”

Morris Michtom, the owner of a general store in New York, read an article about the Roosevelt anecdote in The Washington Post and sent a letter to the White House. He asked for permission from the president to “use your pet name ‘Teddy’ for my little bear dolls.”

And so the “teddy bear” was born.

Since then, we have shared in the joys and sorrows of people’s lives.

When the Titanic sank into the Atlantic in 1912, a black teddy bear was sent as a gift to comfort the survivors and bereaved families in the wake of the tragic accident.

Right after World War II, we had short arms and a small body, due to a shortage of goods.

As many toy companies in the U.S. and Europe shut their doors due to the oil shock of the 1970s, our place of production was shifted to Asia, where factory girls with ages ranging from 13 to 20, who might be grandmothers now, started to make stuffed toys like us.

There are many grown-ups who still take care of us.

In particular, I remember one person, the late essayist Pi Chon-duk. He kept three teddy bears in his bed, until he passed away at the age of 97, two years ago. He covered their eyes at bedtime, sorry that their plastic eyes were unable to close even during the hours everybody sleeps.

Cardinal Kim put me in his bed, as ever wanting to take care of someone or something, no matter how small.

He had passionately devoted his life to protecting all the people on Earth.

He humbled himself, and cried and smiled like a child, out of his untainted innocence.

Today I continue to smile because his warmth still surrounds me.