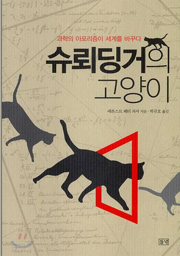 No matter how great a scientific discovery or invention is, if people don’t understand it, it’s useless.

It simply won’t be accepted by society at-large.

Which is why a scientist must express his insight as simply as he can, says Ernst Peter Fischer, author of “Katze auf dem Mandelbrotbaum (Schrodinger’s Cat)” and a history of science professor at Konstanz University in Germany.

If you were one of those students who scratched their heads in confounded perplexity during science classes, you would probably agree with Fischer.

But the journey that scientists take to reach their conclusions is anything but simple.

This book deals with these two issues.

From Charles Darwin and his theory of evolution to Albert Einstein’s discovery of relativity, Fischer observed how the most successful scientists made their research clear and concise in order to communicate with the general public.

At the same time, he also takes a look at the insights and vision that made it possible for them to reach those world-changing scientific discoveries.

Fischer emphasizes that to make scientific discoveries is as difficult as distilling the results to a palatable form for the public. Scientists call this “the Kepler problem.”

The term is derived from an anecdote that astronomer Johannes Kepler, who discovered the laws of planetary motion, had trouble explaining his discovery to the public 400 years ago.

It illustrates how hard communication between the public and scientists is.

The author insists that communicating scientific ideas effectively is the shortcut to putting knowledge to practical use.

For example, if people are aware that bacteria have cell walls and viruses do not, they would understand why antibiotics aren’t effective against viral diseases.

The book’s title is a nod to a famous thought experiment that explains scientific insights.

Austrian physicist Erwin Schrodinger explained the paradox of quantum mechanics, by assuming that if a cat, along with a flask containing a poison, is placed in a sealed box shielded against environmentally induced quantum decoherence, the cat should be simultaneously alive and dead according to quantum mechanics.

In reality, this is impossible, which is why Schrodinger’s cat is often described as a paradox.

Or to be precise:

Austrian physicist Erwin Schrodinger explained the problem of quantum mechanics, pointing out that this theory implies a cat would be both alive and dead, although this is a physical impossibility.