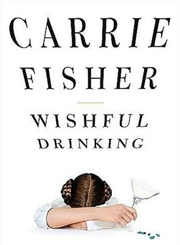 Carrie Fisher is many things to many people: a mother, an ex-wife, a grieving best friend, an inpatient, an outpatient and a damsel in distress.

Her iconic croissant-like hairdo and gold bikini have ensured that space geeks and moviegoers will always think of Carrie as Princess Leia, but she went on to battle demons far worse than Jaba the Hutt.

Carrie Fisher has drunk, snorted and binged her way through years of psychological anguish.

In other words, she is the figurative pin-up girl for bipolar disorder, and she details all in her disarmingly honest memoir “Wishful Drinking.”

This is not Fisher’s first book by any stretch. She is a best-selling author, has written a screenplay for Meryl Streep and had a hugely successful stage show, which sowed the seeds for the book.

But whichever achievement you know her best for, her stellar genealogy was always going to thrust her into celebrity whether she liked it or not.

The wry and endearingly bitter offspring of Debbie Reynolds and Eddie Fisher, she delights in her own dysfunction and makes superb use of the material her parents have provided.

Eddie Fisher ran off with Debbie’s best gal-pal Elizabeth Taylor, before tallying up a string of pretty Hollywood ladies and forgoing all paternal duties.

Carrie’s smart sarcasm makes even the most uncomfortable moments in this book enlightening and inviting.

The frankness and realism with which she discusses her affliction with mental illness is terrific.

Fisher starts off by telling us an anecdote that would be worth almost an entire book: She wakes up next to a dead man.

“Greg was one of my best friends. he wasn’t my boyfriend of anything. Meaning he didn’t die in the saddle, which would have made me the saddle,” Fisher writes.

A tragic event by any account but over time, Fisher says, it’s possible to see the funny side of upsetting moments in your life, because “that very same thing can no longer do you any harm.”

Another startling revelation is that her mother gave her a sex toy for Christmas when she was only 15. That’s shocking enough, but Fisher warns readers that she is actually leaving out the really lurid stuff.

She allows herself to be fragile, she makes fun of herself and anyone with even a cameo in her life.

Somehow her extraordinary life has a distinct feeling of the ordinary, and even the most ridiculous fame-induced situations she gets herself into are relatable.

Carrie Fisher turns a phrase so exquisitely and so cleverly, her work is a joy to read despite its oft-tragic content.

She covers a spectrum of devastating events; her husband leaving her for homosexuality, her best friend dying in the bed beside her, her admittance to hospitals, the disintegration of her relationship with Paul Simon (twice).

But she does it all with such humor, such charming jest and such sharp wisdom you cannot help but enjoy the ride.

This memoir, for want of a less dull term, is everything an autobiographical piece of writing by a celebrity should be.

The book is masterfully composed, piecing together “a life ripped from the headlines” with skill greater than many, many autobiographers before Carrie.

I only hope it’s not the last one.

Earth to Carrie Fisher: Keep writing, babes, the literary world is a better place for having you in it.

Celebrities take note: Carrie Fisher has had some of the most bizarre experiences of any of you, and she knows how to document it.

Publishers take note: If you ever come across a manuscript by Carrie Fisher, snap it up and get it to the printer as fast as possible.

Book shop attendants: Put this one in the front window display.

Readers: Run to the book shop now, grab a copy from the front window and get this memoir into you.