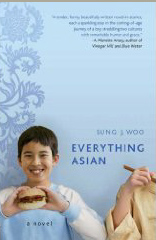 “Everything Asian” by Sung J. Woo concerns a brother and sister, Joon-a and In Sook Kim (a.k.a. David and Sue), revisiting Peddlers Town, a “sad-sack of a strip mall” where a quarter of a century before their parents owned an intermittently successful gift store, which has since been torn down to make way for a Home Depot, according to a Kirkus review in Reuters.

After this brief opening we’re whisked back into the past, to the time when their father set up shop, trying to become successful before sending for his wife back in Korea. David becomes one of the primary narrators, as he recounts with both humor and pathos his growing up and gradual Americanization.

Along the way we meet other shop owners in Peddlers Town, including Mr. Hong, the only other Korean, who owns In the Bag, a luggage store, and Dmitri, owner of HiFi FoFum.

Everyone’s trying to make it, of course, not necessarily to strike it rich but to own a small piece of the elusive American Dream. Woo eventually shifts to a more neutral narrative voice, one that advances our understanding of characters who exist on the periphery of David’s world.

First-time novelist Woo has published short stories and essays in The New York Times and McSweeney’s. This novel, the author’s first, will be published by Thomas Dunne Books in April. Woo is a son of Seoul, who moved to the U.S. where he studied for an M.F.A. in creative writing from New York University. By Michael Gibb