[BOOKS in brief]
Vietnam’s faces, but not the places 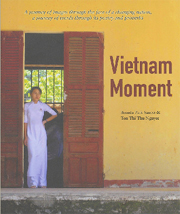 I was disappointed with “Vietnam Moment,” which has just been published by the local English-language press Seoul Selection, for one simple reason.

As a collection of photographs about the Southeast Asian nation, I’d expected to see at least a few, you know, buildings, streets, homes, restaurants, etc.

You see, I’ve never had the pleasure of a trip in Hanoi, Halong Bay or Ho Chi Minh City, and after reading through this book, put together by the photojournalist Brenda Paik Sunoo and the academic Ton Thi Thu Nguyet, I still don’t really have a sense of location.

Paik’s idea is to present her picture alongside quotes from Vietnamese poetry, folk songs, proverbs and sayings. “The experience of finding the right poem or song line, or proverb, allowed me to wander and revisit the familiar street corners, pagodas, rice fields, forests and mountains of Vietnam,” writes Nguyet.

But no schools, hotels, mansions, banks, monasteries or farms, leaving me clueless about what the country really looks like. There are plenty of portraits and one or two landscapes, but the book should have been called “Faces of Vietnam.”

Standout shots, though, include the two cocks fighting, a pig on the way to the market and the two street nappers, but it wasn’t easy drawing meaning from the accompanying sayings. For instance, why for the pig shot did the caption read: “Select a wife by her family background/ A husband by his sexual prowess”? You have to go to the index at the back of the book for an explanation. (The pig was off to impregnate some sows, apparently.)

Gripes aside, I was interested enough to plow through the whole book, but at 19,000 won ($12.54), this is an expensive addition to your travel library considering that photos of Vietnam abound online.By Michael Gibb