Learning the rhythms of Korea

Learning the rhythms of Korea 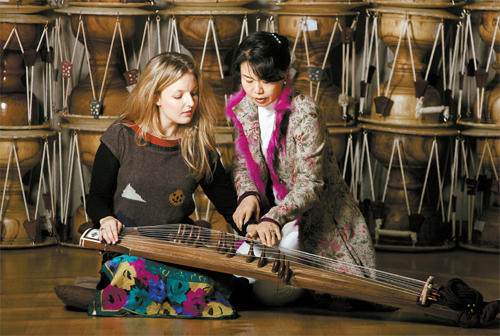 The gayageum is a 12-stringed zither. By Kim Hyeon-dong

As Gandhi once said, no culture can live if it attempts to be exclusive, and, in any case, sharing cultural experiences is rewarding and exciting.

With spring coming up, there are a variety of cultural events for expats held in English.

To list a few, the National Center for Korean Traditional Performing Arts in southern Seoul is offering expats lessons on traditional Korean musical instruments such as the janggu, an hourglass-shaped drum and gayageum, a 12-stringed zither; Namsan Hanok Maeul is offering classes on making traditional Korean condiments such as hot pepper paste, soy sauce and soybean paste; and the Chongdong Theater stages a traditional art performance that includes samulnori, pansori and the fan dance.

I was in a panic. My friend Kelly and I were still searching for the National Center of Korean Performing Arts in southern Seoul, and we were late.

We had strings to pluck and drums to beat, yet here we were racing along a main street, coats aflutter and heels tapping pavement.

When we did arrive at the right building, we were whisked away up flights of stairs, round corners and through doors. The place was a labyrinth, but worth every nervous step.

We took our places on cushions on the floor, shoeless and excited about our special music lessons. We started with the janggu, an hourglass-shaped drum laid horizontally on the ground and struck with a mallet and a stick.

Our teacher, Lee Yong-tai, spoke only a little English. We hardly needed words though; he uttered the beats with such clarity and strength. We pointed to our sheet music to indicate when we need help, repeating after Lee, when he counted the beats for us, going over and over until we fell gently into the rhythm of basic drumming.

Even these basic, beginners’ moves are exciting. I concentrated on this task like no other: I was so ensconced in watching the way we should hit the drum and hold the mallet and place our feet I almost forgot I’m a clumsy, giggly young woman posing as a traditional Korean musician.

The best thing about the janggu is the grace with which you can play it. Sitting cross-legged on the floor, banging this awesome drum like a toddler with a stick, at first, I felt totally out of my league. As I got the hang of it, though, I found there’s something meditational about it.

Before Lee left, we were treated to an improvisational performance. He started with some of the beats he taught us, then got faster, slower, louder until his entire body thrashed from side to side.

Both Kelly and I knew we were in the presence of something very special. It’s sensational, the way he plays. Forget trendy drummers onstage with a rock band clattering away - this is the real deal.

Lee was wearing all black, simple clothes. But when he played his janggu, we could almost picture him in traditional dress; his rhythms were so tribal and stirring.

Apparently the janggu, when its two sides are played together and in alternation, represents masculine and feminine harmony. There is indeed a lovely sense of balance in the sound of this drum. When played properly (by someone who knows what they are doing, not me) it seems like a very masculine sound.

Beating drums is like beating chests; there’s something manly and assertive about it. That’s not to say women can’t play it, just that if the instrument were gendered I think it would be male, which was lucky really, because the next instrument we learned - the gayageum, a 12-stringed zither - was ethereal and womanly, just like our instructor, Jang Kyung-won.

I was incredulous when she told us she was in her 40s. Like so many Korean women, she had the complexion and disposition of someone both young and wise, an ageless sort of elegance I have encountered nowhere else. 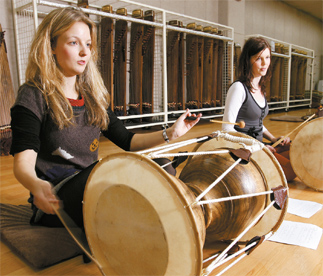 The janggu is an hourglass-shaped drum.

The lovely young man who organized this whole experience, Lee Bae-won from the National Center of Korean Performing Arts, helped by translating for Jang and adding tidbits of information when he could.

The first thing he told me was that if we were to have a two-hour lesson, as the program is designed, it would leave our fingers bleeding from the coarse, harsh strings. The key is to keep your hands relaxed, but be able to pinch the string with your index finger strongly enough to make a deep sound.

Playing the instrument is somewhat like wearing high heels but never grimacing when they hurt. You sit with this long but light instrument stretched out across your lap and legs, plucking and plucking the strings until you have dents in your fingertips, but all the while you have to look tranquil. This is something we amateurs failed spectacularly at, but our delicate instructor has mastered it.

Jang is a gayageum performer. She teaches high school students, but she is adept at more instruments than she teaches. She has done traditional fan dancing since 1979, traveling to Japan and Australia for performances.

The center sends performers around the world each year, and on the schedule this year are Dubai, Russia and Brazil. As an Aussie, I hope Jang, with her group of performers, will perform in the Sydney Opera House again one day.

For now, we were content with the private performance she gave us, strumming a famous Korean song on the gayageum as I gawked at her in awe.

As we snapped some photos to remember the experience and chatted idly with our newfound musical friends, a group of middle-aged women filed into the room and started tuning their gayageum in preparation for class.

They reminded us of housewives at home in Australia, who get to a certain age when their children have grown and decide to take on a new skill with their girlfriends. I looked at Kelly, giggling as I imagined us taking on the gayageum or the janggu as older ladies.

We both left with the ephemeral sense of victory one has after a brief beginners’ class; we knew we would need another few decades to master the instruments but we felt pretty good about having tried them for an hour and a half.

The center offers expats the chance to get hands-on experience handling traditional Korean musical instruments through lectures and workshops. The “2009 Traditional Music Class, Spring Semester” is a 12-week course offering sessions on the janggu, gayageum, danso, and samulnori. There are 80 spots available. At the end of the course, the students will stage a show for their family and friends.

The Ssamziegil Workshop, which is ongoing, offers you the chance to make something, literally, out of Korean culture. Ssamziegil has been leading a movement to modernize china, textile, jewelry and wood crafts and bring art and the general public closer together.

Participants get the chance to design their own hand-painted china, Korean paper and beaded accessories using traditional methods.

The china course is called “Cera Work,” while the “Gumha Chilbo Art” session brings together the tutors’ 40-year tradition of making accessories for the home. Under the motto of “Sue Design” to create a national cultural brand, Ssamziegil started an eco-friendly D.I.Y. experience program using wood and mother-of-pearl, which is also known as nacre. 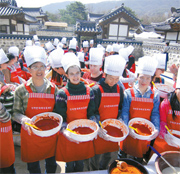 At Namsan Hanok Maeul you can taste the coziness and peaceful atmosphere of traditional Korean housing in the middle of the city.

Starting from March, the center will be running events on making Korean hot pepper paste, soy sauce and soybean paste, which are the base for almost every Korean dish. Visitors can get a better feel for preparing Korean dishes after using original condiments.

One of the highlights is preparing hot pepper paste with strawberries, a sweet and spicy experience.

On March 29, which is the third day of the third lunar month, there are special events including making hwajeon, sweet, panfried rice cakes with azalea petals, and making arrows for archery, a traditional sport in Korea. There will also be samlumori performances to entertain visitors. 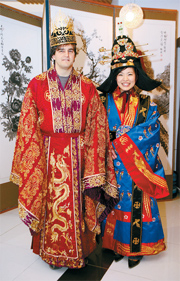 The traditional art performance “Miso” is a great introduction to Korean culture. Since 1997, the theater has been performing samulnori, pansori, Korean classical music and the fan dance.

Last year the show’s producers added a story line to bring more life to the performance. The theater is located in one of Seoul’s most interesting areas, combining history in the shape of Deoksu Palace, art galleries and cafes. Tickets range from 20,000 to 40,000 won.