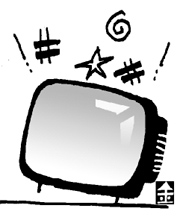 A husband conspires with his lover to kill his wife, but the wife survives and comes back, transformed into another person, for revenge. In her new form she looks exactly the same, but with a spot on her face. Yet her own parents and brother cannot recognize her, not to mention her husband. She masters four foreign languages, golf and swimming in just six months.

This is the story line of the SBS TV drama, “Temptation.” It is an absurd story that would even put “The Count of Monte Cristo” to shame, but it is so popular among Korean housewives these days that you would have difficulty being included in their conversations if you do not watch it.

With the success of “Temptation,” so-called “dead-end dramas” have taken over television. It is no use changing the channel. All the dramas put aside internal character descriptions and detailed narratives in favor of abnormal characters and unrealistic incidents that ignore the laws of probability.

A makjang, or dead end, is defined as “the dead end of a mineshaft” in the Korean dictionary. As the Korean expression insaeng makjang (“dead-end life”) reflects, “dead-end dramas” are so simple and blatantly suggestive that they cannot go any deeper.

Everyone criticizes them, but the broadcasting company is not going to budge because the TV program has ratings around the 40 percent mark, and attracts a loyal fan base appealing to advertisers. Some defenders even say, “Shakespeare’s plays include so-called ‘dead ends,’ too.”

In some ways, this is true. Richard from “Richard III” impudently proposes to the woman whose husband he killed, and proposes to his niece, despite being cursed by his mother and sister-in-law. In other plays people cannot differentiate between male and female twins (“Twelfth Night”), and a tragedy occurs due to a mysterious drug that makes a person appear dead (“Romeo and Juliet”).

I am not saying we should expect more from a TV drama when similar contrivances are found even in the classics. Putting everything else aside, let’s look at when Shakespeare wrote: from the end of the 16th to the beginning of the 17th century, around the same time the old Korean novel “The Story of Hong Gil-dong” was written. In other words, “dead-end dramas” regress our entertainment standards by 400 years.

I believe the bad economy has something to do with people flocking to “dead-end” stories that can be enjoyed without thinking too much. The news from Broadway, New York City, is that large-scale musicals are continuously closing, and that the risque, disposable musical form of the burlesque is making a strong comeback for the first time in 100 years because of the stagnant economy. Perhaps we can take comfort in that Korea too is participating in the latest international trend of “declining popular culture.”