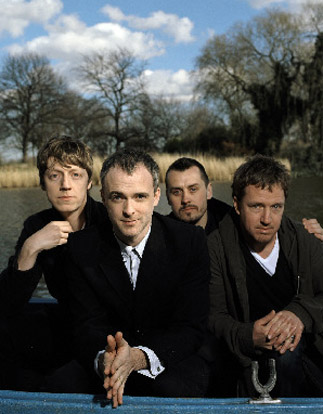 Scottish alternative rock band Travis are performing this Sunday at the Olympic Hall in Olympic Park, southeastern Seoul. Provided by the organizer


Travis, an alternative rock band from Scotland, is often credited with having set the tone for bands such as Coldplay, Keane and Snow Patrol.

Since their debut album “Good Feeling” in 1997, they’ve released six albums that have collectively sold more than 10 million copies, and taken home accolades like British Album of the Year at the annual Brit Awards.

Ahead of their Korea concert, Travis expressed their excitement at another gig in Korea following their performance at the Incheon Pentaport Rock Festival last year. Here are some excerpts from an interview with them.

A. The highlight is the first year as a band in 1996 - coming to London together, not knowing what to do, but having these good songs to play, living in the same house together. It was a really special time. Even though it was very much a struggle, that was the highlight because we were so innocent.

Obviously and strangely, at the most successful time [of our career] I was most unhappy and miserable. We were so busy and your life is turned upside down by the success. It’s a weird thing to become famous. It really was not an enjoyable process.

It’s been 12 years since the group was formed. What was the journey like?

Our journey was a really strange one. We were kind of an accidental band - we don’t sit down and plan anything. We plan tours and that’s the only thing we plan.

We don’t sit down and say “Okay, let’s write a song.” [It was] a very interesting journey. All the stuff that happened was like a rollercoaster.

Tell us about your latest album, “Ode to J. Smith.”

We wanted to do something very different for this record. It’s like a book. So it has each chapter of a book. The title refers to a character. And the songs on the album can refer to themes in this guy’s life. We chose this name as it is a common name for English guys.

My favorite track, “J. Smith,” is quite an ambitious song, with big choirs, dealing with angels and devils, heaven and hell, a lot different from other three-minute pop songs.

So I thought it would be quite fun to name the most ambitious thing we have ever done after the most common name.

What did you think of the Korean fans’ reaction to your performance at the Pentaport Rock Festival last year?

When we got to the stage, we didn’t know what size the festival would be, how many people would be there. But masses of people went crazy. It was such a good experience.

When you are in a band, you see people at their most natural. Koreans are natural, beautiful and great people. So it is very nice to come back and play.