Korean MMA stars on the ropes

Korean MMA stars on the ropes 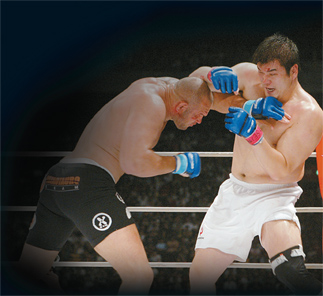 During his debut match in 2006, Lee Tae-hyun (right) is backed into a corner by Ricardo Morals of Brazil. [JoongAng Ilbo]

Korean athletes’ transition from their own area of specialty to mixed martial arts (MMA) has not been kind.

In search of big money and stardom, a number of sportsmen made the jump from ssireum, traditional Korean wrestling; boxing and judo to the rough world of mixed martial arts just as the hybrid form was gaining in popularity.

Japanese MMA organizations quickly gained a strong fan base here in the early 2000s, and they scouted for experts in ssireum and boxing as well as Olympics athletes.

But most of them are now suffering, as Pride FC, a Japanese MMA organization, is now defunct and K-1, which combines numerous stand-up combat sports, is experiencing financial trouble.

Lee Tae-hyun, 33, is a respected name in ssireum. He holds the all-time winning record of 472 wins, but his comeback after a foray into MMA in Japan left fans disappointed.

His past mastery of the sand pit seemed to have deserted him during a Lunar New Year tournament at the end of last month. He ended up losing in the quarterfinals and looking listless in doing so. 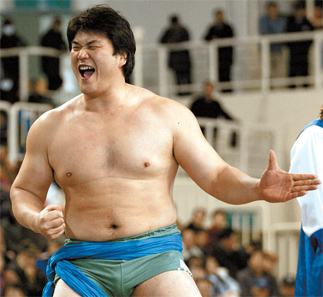 “I was excited to hear the fans shout my name and cheer me on,” said Lee with a smile.

Lee retired from professional ssireum in 2006 and made his debut on a Pride FC card in September of that year.

Having had the upper hand in size, many expected Lee to win his bout against Ricardo Morales of Brazil. Instead, he experienced a crushing defeat.

The result of the fight left its mark, literally, on Lee’s face.

He suffered severe cuts that required stitches, wounds that would eventually heal, although the former national champion’s confidence was badly shaken.

After two losses and a win, Lee gave up on an MMA career.

Prior to trading in his satba, the cloth belt worn in ssireum, for gloves, Lee along with the famed Lee Man-ki held the distinction of holding the most number of heavyweight championships - 18.

Lee only got a second shot because he had established himself as one the best in ssireum history.

Many other wrestlers who leave in search of fame in MMA have trouble adapting and often find that there is no place for them if they return to their original art.

Choi had carved out a reputation as a tough fighter and his move attracted a lot of attention. Soon other ssireum fighters took the opportunity to fight for a potentially lucrative career in MMA.

Athletes such as Kim Young-hyun at 33 years old made his debut on the K-1 stage in 2007. Kim Dong-wook, Kim Kyung-suk and Shin Hyun-pyo were also scouted by K-1.

But of the numerous ssireum fighters who made the transition, Choi Hong-man (12 wins and 5 losses) is the only man left standing.

Kim Dong-wook, Kim Kyung-suk and Shin Hyun-pyo never won a bout, and Kim Young-hyun (215.9 centimeters and 156 kilograms) has an uncertain future after losing last July in a K-1 World Grand Prix 2008 in Taipei to Ruslan Kareaev of Russia in 15 seconds.

The humiliating defeat left Kim with a broken nose, and after recuperating from his injuries, he is back in training but with no scheduled fights.

Part of the problem for those making the switch from ssireum to MMA is the ability to strike opponents.

Lee Tae-hyun had been confident leading up to his debut in Pride. Standing 1.96 meters and weighing 138 kilograms with plenty of power, his confidence was not unwarranted. In his debut match, he was able to score three takedowns against Morales but despite a height advantage, Lee took a pounding.

“Even when I was in the mounted position, I was afraid of getting hit. My skills were seriously lacking,” said Lee. 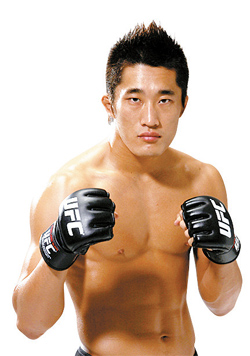 “Ssireum and MMA are fundamentally different. You must prepare to die when entering the MMA ring. I hope other ssireum wrestlers don’t bother, but if they do want to make the transition, they must do so at an early age to get acclimated to the new sport,” he added.

Kim Young-hyun is no different. Although he is an imposing figure in the ring, his lack of skills and speed puts him at a disadvantage.

Boxers have not had it any easier in adapting to MMA.

Having made his debut on home soil in September 2006 in Seoul, Choi went on to two victories until he suffered his first defeat in December 2007, against Masato at the K-1 Premium 2007 Dynamite tournament.

Chi has not fared any better. He made headlines when he gave up his WBC championship belt and made the jump to K-1, citing the comparatively small purses in boxing.

He won his one and only match in February 2008 against Ryuji Kajiwara in K-1 Asia MAX 2008 in Seoul by a decision. Despite the win, critics saw a lackluster fight.

Chi has recently placed focus on training young boxers by opening his own boxing gym.

“If not for the contractual agreements that bind these fighters, we would like to bring these boxers back,” said one Korea Boxing Commission official.

“Choi and Chi have not fought in a long time but they haven’t retired. There is a big chance they will participate in the Asia MAX tournament in Seoul,” said Jung Yun-soo, the director of K-1 organization’s governing body, Fighting and Entertainment Group’s Korean branch.

In reality, despite the latest efforts of FEG’s Korean branch, the chances of the organization focusing on aging former boxers is slim. Choi and Chi plan on fighting in one or two more bouts before they hang up their gloves for good, they said.

There are a few Koreans fighters remaining in MMA but they also have some steep hills to climb.

Choi Hong-man continued to fight in the strike-based K-1, as opposed to the grappling K-1 division, but after five losses from September 2007 to last December, Choi will join Dream, an organization that allows ground work, such as grappling and choking.

“I don’t see his striking improving at this point. It will be better to have him compete in competitions that involve grappling,” said one FEG official.

Yoon Dong-sik, a Hiroshima Asian Games gold medalist in judo, had been showing some respectable wins, but he lost two straight bouts in Dream competitions. His ground game is solid but his striking is still poor.

Kim Dong-hyun, a former judoka who is training for today’s MMA, won two and lost one of his UFC matches. Although Kim has showed some promise, he’s still in his early days.

For athletes who make the jump into the MMA arena, even if they have a specialized set of skills, at some point they reach a psychological or skill limit.

Currently, there isn’t a single Korean fighter who has been able to overcome these limitations and reach the next level.

Mixed skills, not a single speciality

Mixed martial arts has evolved so much over the years that while it was once possible for fighters to win bouts in a single speciality, like boxing for instance, fighters now need a mixed bag of skills under their belt.

Fighters such as Croatia’s Mirko “Cro Cop” Filipovic and Brazil’s Antonio “Minotauro” Rodrigo Nogueira can no longer dominate with swift kicks to the head or jiujitsu moves.

Fighters must be well-rounded, meaning they must be strong in all aspects of their MMA.

“A fighter who specializes in one area is like a double-edged sword. Those who are successful nowadays do not have a weakness in their game,” said Kim Nam-hoon, an MMA analyst on the Super Action cable channel.

Russia’s Fedor Emelianenko, an M-1 champion and often considered the best MMA fighter in the world, has a well-balanced striking and ground game. Middleweight Anderson Silva from Brazil and Georges St. Pierre of Canada are considered strong in every area.

Meanwhile, a Korean fighter by the name of Kim Dong-hyun with a background in judo and trained as an all-round fighter, currently has two wins and one loss.