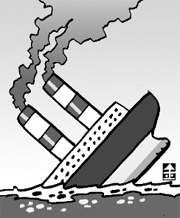 Korean Air Flight 801, carrying vacationers and honeymooners, was scheduled to land in Guam just after 1 a.m. on Aug. 6, 1997, but before passengers had time to scream, the aircraft crashed into Nimitz Hill, killing the 228 on board. Heavy rain and instrument malfunction were the immediate causes.

But the final conversation between the pilots recorded on the black box gave away another key factor behind the crash - the captain ignored the first officer’s warning that the runway was out of sight and landing was not possible.

Surprisingly, air crashes happen far more often when the captain, rather than the co-pilot, is flying the aircraft, according to Malcom Gladwell in his latest book, “Outliers: The Story of Success.”

The anxious first officer of the ill-fated KAL aircraft could not bring himself to do more than hint that the weather radar had helped in past situations. He could have seized the controls, but coming from a culture of strong hierarchy, deference inhibited him. When the captain is flying, the first officer tends to defer, even when he or she suspects danger.

The influence authority plays in the cockpit is known as “captainitis” among pilots. Such unquestioning obedience to superiors often leads to accidents and calamitous consequences, even death.

An American research team, posing as doctors on their rounds, gave orders to nurses to give doses of unauthorized drugs to certain patients. Of the 22 nurses, 21 complied without question. As trained nurses, they perceived commands from doctors, their superiors, as an obligation to be obeyed.

Psychologist Robert Cialdini warned of the risks of arrogant leadership. But those who believe themselves to be competent tend to be deaf to others.

Noble Prize-winning scientist James D. Watson, an American molecular biologist who codiscovered the structure of DNA, gave another formula for success. When asked by students how he came to crack the intricate DNA mystery, Watson put it down to his relatively less bright intellect. He advised students not to be the smartest person in the room because “if you are the smartest person, nobody can help you.”

President Lee Myung-bak recently embarked on the second year of his five-year term, and many advised him to abandon his signature CEO-style leadership. Lee’s “bulldozer” approach made him a successful and efficient chief executive. But leadership by orders and commands does not work well for a president. Painful as it may be, President Lee needs to swallow his pride and take this advice. It’s a dangerous ride if the captain is both deaf and blind.