[TV review]A cardinal, a congress and a cool catharsis

[TV review]A cardinal, a congress and a cool catharsis 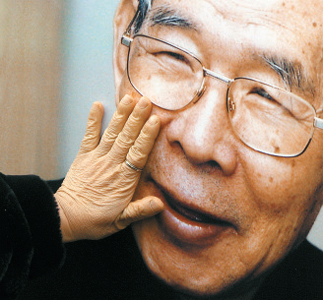 The hand of a mourner touches a photograph of the late Cardinal Stephen Kim Sou-hwan.[YONHAP]

It began with the demise of the late Cardinal Stephen Kim Sou-hwan and ended with U.S. President Barack Obama’s speech before Congress. Sorry, folks. I am not talking about some great event. It was my petty, belated winter vacation, which started and ended with television.

With a mind-set befitting that of any respectable TV reviewer, I began the first day of my vacation leisurely groping for the remote when I came across a live airing of Cardinal Kim’s funeral at Myeongdong Cathedral.

Before I knew it, I found myself in an upright position, focused on the funeral that had hit my heart hard. I even delayed a lunch appointment, at the expense of 20 minutes of nagging from my poor, put-off friend. But I had no regrets, because I felt I had cleansed my heart after having cried until my eyes were sore.

I had even taken 30 precious minutes out of my weeklong vacation (a total of 604,800 seconds, according to my less than stellar arithmetic skills), to leave a post on a leftist party’s Web site to say how disappointed I was by some of its party members’ posthumous criticisms of the cardinal.

Don’t get me wrong. I am not a boring, twisted conservative (although I do have a huge amount of respect for some of the sane conservative people I know). Nor am I a rash and twisted leftist. I am an ordinary, taxpaying citizen who just wants the world to be a little better, a loving place.

But enough of my complaints about the conservative complainers. Let’s move on, shall we?

The press conference may have been delayed or perhaps even canceled. (I will never know because I had to run, without makeup, mind you, to soothe my angry friend over lunch, which was definitely delayed.) One thing is clear, though. The three mainstream channels seemed to have no regrets about not airing the Clinton press conference live.

I kept clicking my remote control among the four channels whenever I found the anchors’ words too loud or unnecessary, but witnessing the funeral of a much-storied priest who had the guts to break the silence around the injustices committed under the military regimes in Korea’s dark past was a great TV viewing experience.

I have to say, however, that I did not really appreciate it when the prime minister took the (unnecessary) step of reading President Lee Myung-bak’s speech and even dared to touch the coffin serving as the cardinal’s final resting place. But those five minutes of stolen time still did not ruin the two good hours taken up by the funeral.

When all is said and done, I had to take a taxi to the place where I was meeting my friend for lunch because by then I was extremely late, even though the end of the month had brought its usual problem of too little cash as a result of too much splurging on Internet shopping malls.

I also had some great TV viewing in the later days of my vacation, this time on CNN as President Obama took the podium on Capitol Hill for his first speech before a joint session of Congress. Watching Her Majesty Michelle Obama wrapped up in her posh purple dress was a good enough experience, but watching the parties of the donkey and the elephant giving the president a wholehearted welcome was almost thrilling.

The fun didn’t end there. Right after my vacation ended, I happened to see the front page of my newspaper featuring a photograph of two Korean lawmakers in the midst of a fistfight. It was the best wake-up call, and sent me right back to reality, but not before I made a note of all the reasons I’ll have to look forward to my next vacation.