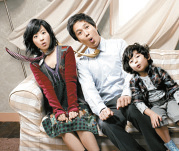 Barry Sonnenfeld, the director of “Men in Black,” “The Addams Family” and “Wild Wild West” has his eye on remaking the comedy “Scandal Makers,” which sold 8.2 million tickets as of Monday after its release last December.

The Korean film starring Cha Tae-hyun and Park Bo-young will be remade in Hollywood, according to M-Line Distribution, an international film sales company.

The distribution company said the cast and production crew have yet to be decided.