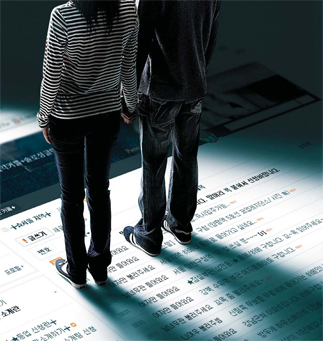 An image captured from one of the Web site’s dedicated to cohabitation. The messages written in Korean give the posters’ personal details. [JoongAng Ilbo]

Men and women, whether they are just friends or are in an intimate relationship, rarely live together in Korea.

Such a practice, which is more commonplace overseas, especially in more liberal, affluent Western societies, is considered taboo here, largely because of the strict Confucian moral codes that govern relationships between the sexes.

But recent research suggests that the younger generation here is becoming far more amenable to the concept of cohabitation, a point of view that may have been influenced by recent TV shows that depict cohabitation as fun and exciting.

Given the state of the economy, this trend is likely to continue.

The biggest surprise recently comes courtesy of a 2008 survey by the National Statistical Office of 42,000 men and women.

The survey found that 40 percent of respondents aged over 15 said, “A couple can live together in an intimate relationship even without legal or religious sanction,” while 60 percent of those polled aged between 20 and 29 supported cohabiting.

Not surprisingly, more than half of the respondents aged over 50 disapprove of cohabiting, and women tended to be more in favor of the lifestyle than men.

Park Sun-young, a researcher at the Korean Women’s Development Institute, claims the changing attitudes can be traced back to the MBC TV drama “Attic Cat,” which first aired in 2003.

“The drama’s two main characters lived in one house - though no sexual relations were involved,” Park said.

Several years have passed since the drama was first broadcast, but since then a number of other television programs - mainly reality shows - have depicted cohabiting as “cool.” Counted among them are Comedy TV’s “I’m Your Pet” and MBC TV’s “We Got Married.”

But Park believes these shows fail to tell the real story. “The shows portray an unrealistic image,” said Park, adding that the shows rarely delve into the grittier side of living together.

In a state where traditional Confucian family ethics have been the bedrock of society, older and more conservative figures in society are taken aback by the apparent new trend.

Kwak Geum-ju, a psychology professor at Seoul National University, said she was surprised to find that some 20 percent of the 200 students she polled were in favor of cohabitation, and 34 percent said they had no objection.

Considering that Seoul National University students tend to come from more conservative families, Kwak said, she could not have foreseen that only 10 percent of the group would be against cohabitation.

“I could definitely sense that cohabiting is no longer a taboo but a possible way of life even for students at Seoul National University who live alone,” the professor said.

Kwak believes the reason so many more students than expected favored cohabitation is partly connected to changing attitudes toward marriage.

“Fewer students than before seem to have a fantasy about the ‘perfect marriage,’” she said. “They [the surveyed students] seem to be very realistic and practical about life in general, including married life. They know marriage isn’t an easy job.”

According to a study by the National Statistical Office, fewer singles are getting married. Last year, 27,000 couples wed, a 19.6 percent decrease compared to the year before.

“The younger generation today seems to fear marriage or even a divorce; as an alternative, they choose to cohabit,” the professor said.

The drastic change in the mind-set of the younger generation is even clearer when you consider the number of Web sites dedicated to cohabitation, of which there are some 1,200. They claim membership in the thousands. At one of the sites, which boasts more than 30,000 members, one poster identified only as K, aged 27, was searching for a housemate.

He’d already had some experience cohabiting, explaining that he had lived with his ex-girlfriend when he was studying in England in 2006.

The couple lived together for four months, K explained, and when they came back to Seoul, the two continued to live together, but this time under the condition they get married. But as time passed, the couple broke up.

However, K doesn’t regret the experience, arguing that “you need to practice marriage” and that “you get to know the true character of your partner when you spend time together around the clock.”

On the same Web site, another poster, identified only as P, said he lived with his girlfriend after he completed his military service and was working part-time in Seoul away from his family.

He was a freshman and sharing the rent saved him money.

“We were able to save not only on housing costs but also on dating costs,” he said. 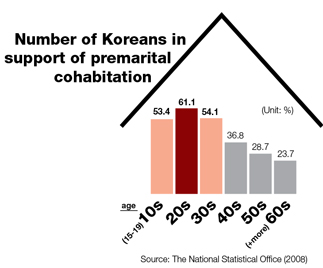 But like K, P and his partner broke up after he found another girlfriend.

A downside to these Web sites, though, is that even if they are well meaning and intended only for finding people with whom posters can share living costs, they can attract the attention of people, mainly men, who are only looking for sex partners.

In fact, when a JoongAng Sunday reporter registered with one of the sites, she received a flood of inquiries from men asking for a date that included information on the sender’s height, weight and contact number.

Some of the messages posted on the site were explicit in what the poster wanted.

“Looking for a housemate - Waiting for calls from only females.”

“I have three rooms in a flat in southern Seoul - Females, call me immediately.”

“I’m from Seoul National University and I’m looking for a female cohabitant.”

Park, of the Korean Women’s Development Institute, suggested that a deeper challenge faced Korean society as more young people tried to live with the opposite sex.

“Korean society is not built around the concept of men and women living together,” she said, unlike some Western countries.

“In some European countries, couples who live together are offered legal protection and are seen as unofficial families,” Park said.

For example, some unmarried couples in the U.K. are entitled to some state benefits. In Canada, a common-law (or unofficial) relationship is legally recognized if the couple have been living in a conjugal relationship for at least 12 continuous months and the couple have a child by birth or adoption.

“But in the case of Korea, there is no such system for couples who cohabit and they are often left in a gray area if they need to deal with legal issues,” Park explained.

For example, couples cohabiting are not entitled to governmental benefits such as an income tax deductions, national pension and health insurance since they are not registered as a family.

As the debate continues, Kwak points out that it’s not a matter of right or wrong.

“Changing attitudes, especially among the younger generation, is part of the transitional period of becoming a more open-minded society,” she said.