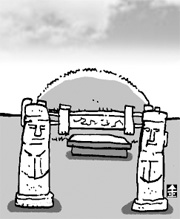 The March First Movement, which saw its 90th anniversary this year, was sparked by the funeral of Emperor Gojong of the Joseon Dynasty. A rumor swirled that the emperor had been poisoned. The healthy emperor drank sikhye, a traditional sweet rice beverage, lay down to sleep and then passed away suddenly. On night duty that evening were Japanese collaborators Lee Wan-young and Lee Ji-yong so it was understandable that such a rumor spread. The enraged masses shouted “Long Live Korea!” in front of Deoksu Palace, where Emperor Gojong’s body was laid.

A gravestone marks the monarch’s tomb, inscribed with the name of Emperor Gojong of Korea. It was solely owing to Goh Yeong-geun, the guard of the grave, that the monumental gravestone was erected in order to protect the royal tomb.

Goh was a high-ranking official who served as the head of Jangdan County and also the governor and chief military commander of the Gyeongsang Provinces. In 1903, he went to Hiroshima, Japan in search of Wu Beom-seon, an accomplice in the murder of Empress Myeongseong, Gojong’s mother. Finding Wu, Goh killed him by stabbing him in the neck with a dagger. Goh turned himself in to the Japanese police and submitted a letter in which he wrote that he could not live under the same sky as the traitor.

After spending time behind bars, Goh returned home. After Emperor Gojong passed away Goh volunteered to guard his grave.

He had a task to do: that was to set up the gravestone which had already been completed but was not allowed to be erected. Imperialist Japan did not allow such a gravestone, citing the words “Korea” and “Emperor” in the inscription for its refusal.

One day, after having guarded the stone-less grave for four years, Goh suddenly resolved to put up the gravestone. He abruptly ran to Changdeok Palace, the residence of Emperor Sunjong, and said, “At last I can repay the late emperor’s benevolence” and waited for Sunjong’s decision.

Goh was fired from his position as the grave guard.

He later built a straw-thatched hut beside Emperor Gojong’s grave, and lived there until he died and was buried nearby.

In his speech commemorating the March First Movement, President Lee Myung-bak unprecedentedly did not utter a single word about Japan. The president’s act was later interpreted as stemming from his resolve to build future-oriented Korea?Japan ties.

Exchanges and cooperation between Korea and Japan are absolutely important, but we should not forget the past. Although we shouldn’t stew over Japan’s past atrocities and hold grudges forever, we do need to look back to the past to avoid making the same painful mistakes.