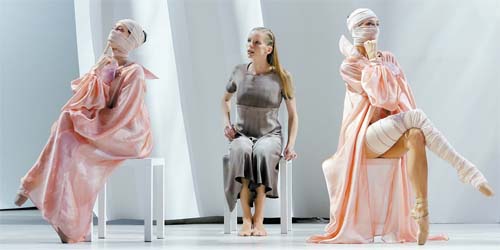 Cinderella (center) pictured with the two stepsisters in a performance of “Cinderella” by the classical ballet company Les Ballets de Monte Carlo, based in Monaco, which was directed by Jean-Christophe Maillot. Provided by Korea National Ballet Company

Korea’s beloved ballerina Kim Ji-young recently decided to return to the Korea National Ballet Company for a long-awaited comeback after seven years as a soloist at the Dutch National Ballet.

“I believe that it is better for me to show my best in my home country in front of my family and fans than to stay overseas promoting my country,” she said.

The prima donna’s choice for her comeback show is Jean-Christophe Maillot’s “Cinderella.”

While Cinderellas choreographed in 1945 by Rostislav Zakharov and in 1948 by Frederick Ashton are considered classic interpretations that stay loyal to the original fairy tale, Maillot’s rendition is deemed unique and unconventional with a fresh contemporary twist.

In the original plot, the focus is on the relationship between Cinderella and Prince Charming, but Maillot’s idea is to shed light on the undying love Cinderella’s father nurtures for his dead wife, plus her stepmother’s twisted desire for her father.

Also, replacing the fairy godmother is Cinderella’s real mother. She is resurrected as a beautiful, sensual fairy who plays Cupid between Cinderella and the Prince. But perhaps the most startling aspect of Maillot’s Cinderella is the absence of the glass slipper.

At the ball, Cinderella dances barefoot, and when the Prince goes looking for her, he identifies her glittering feet among the bruised ones of her stepsisters.

Jerome Kaplan, who lists “Romeo and Juliet” and “Raise the Red Lantern” on his resume, has once again dressed the characters in this extraordinary version of Cinderella.

While Kim Ji-young will play the title role of Cinderella, her longtime rival Kim Ju-won will play Cinderella’s mother which is a good enough reason to attract local ballet fans.

“Dancing on stage, it’s not something you can fake,” said 31-year-old Kim Ji-young at a press conference last week. “Every morning I wake up noticing more lines on my face. But my body and its experiences over the years are my greatest assets.”

So if you wish to see the “true” Kim Ji-young playing barefooted Cinderella, the Korea National Ballet Company’s Cinderella is definitely a tempting choice.