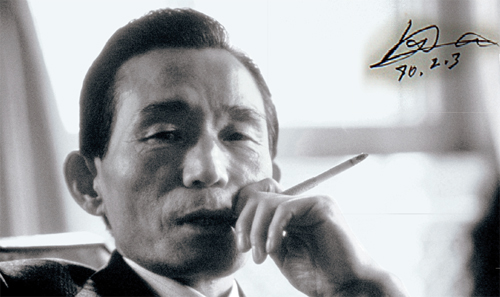 The late President Park Chung Hee is known for his “letter leadership,” in which he used personal, handwritten letters to deliver messages and promote his policies. [JoongAng Ilbo]

The 299 personal letters of King Jeongjo (1752-1800) made public last week are a reminder that until very recently a handwritten note was the most powerful and persuasive form of communication.

Through the royal correspondence, we can glean insight into the affairs of state at that time and the personal feelings and reflections of a Joseon monarch.

One Korean leader known to have taken full advantage of the power of the nib was the late President Park Chung Hee (1917-1979). During his presidency (1961-1979), Park dispatched numerous self-penned missives to people in different sectors of society, from prime ministers and mayors to the bereaved families of drafted soldiers. 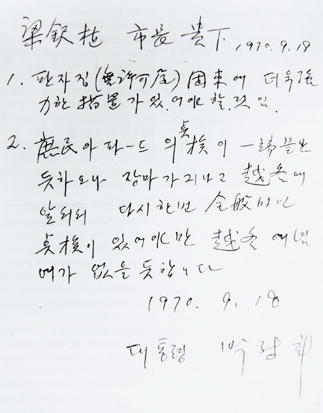 We have obtained some of these letters through the support of the Park Chung Hee Memorial Committee and descendents of former education minister Min Gwan-sik and former prime minister Park Tae-jun, among others. Through this correspondence, we can catch a glimpse of Park’s passion for modernization, the authority that marked his leadership and his shrewd political mind.

All it took was a handwritten letter.

The late President Park Chung Hee was determined to produce steel, the base material for most manufacturing industries, and he pledged enormous support to Posco, now the world’s second-biggest steelmaker by market value.

Today, a discolored, handwritten memo is witness to Park’s desire to build up the industry. It stipulates Posco has the authority to choose its manufacturers and suppliers, and it contains a government guarantee in case urgent contracts are required. 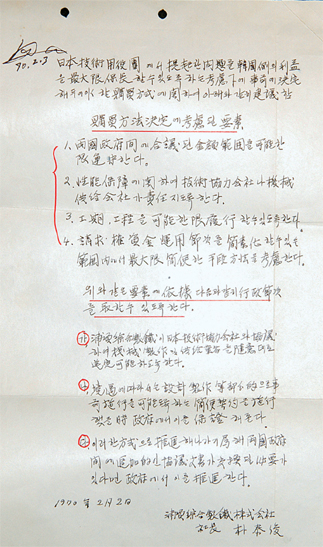 Another letter by Park, also written in 1970, to former Posco head Park Tae-joon pledging support for the steelmaker.[JoongAng Sunday]

The paper was what the fledgling steelmaker needed to bypass any restrictions that might have blocked its path toward growth and economic strength. Just as a police detective might show his badge, this document gave Posco executives unprecedented status.

And this wasn’t the only example of the president’s handwritten support for Posco.

“When I visited Japan in the 1960s to learn about Japan’s steelmaking industry, the president sent several handwritten notes encouraging me to study hard so that I could contribute to our nation’s modernization,” said Park Tae-joon, 81, former president of Posco and now the company’s honorary chairman.

An official who worked at the presidential office during Park Chung Hee’s presidency noted the late president’s frequent tendency toward epistolary correspondence. “Whenever Park came across ideas on new policies or administrative orders, he would note them down and send them to the relevant government officials,” he said.

Park’s handwriting is also filled with character, a testament to the late president’s charisma. People around Park reportedly called it “the commander’s font,” saying his handwriting was so powerful that you could sense a kind of leashed violence within. 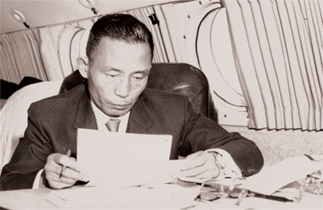 The late President Park Chung Hee checks through documents on a flight to Australia in September 1968. [JoongAng Ilbo]

For Park, letter writing was a way of declaring to the nation and the rest of the world his intent and his determination to make Korea a powerful country.

“Twenty percent of Park’s passion was used for devising plans and 80 percent in making them happen. And letters were certainly an effective means to achieve his plans,” said former finance minister Kim Yong-hwan.

Passion for modernization, signs of humanity

In line with his ambitious project aimed at industrializing post-war Korea, many of Park’s letters show him to be a hands-on manager of development plans.

“The newly built apartments have been checked, but they need to be re-examined after the monsoon so that we are prepared for the winter,” Park wrote to former Seoul mayor Yang Taek-sik in September 1970. Park was referring to apartments that he ordered built to replace the capital’s sprawling shanty towns.

A month later, Park wrote to Yang again, this time, about the cityscape.

“Many of the trees lining the streets in Seoul were planted right after the Korean War without much research and planning,” Park wrote. “That is why there are poplar trees that aren’t really appropriate for the general look of the city.”

“The state of the offices at Suyeong Airport is extremely bad. I can only assume those responsible couldn’t care less or are just too lazy. For instance, the bathroom is filthy,” wrote Park, lashing out at one of his transportation ministers during his presidency. Suyeong Airport was the old airport in Busan.

The letters also convey the president’s humane side. Park is often associated with the military and an authoritarian rule that stifled free speech and the press and allowed torture of political prisoners to flourish.

In a 1978 letter, he expresses his gratitude to the president of an apparel company, Taeheung. The company was in charge of making winter clothes for the “Ms. Bus Guides,” who were in charge of collecting bus fares and controlling stops for passengers between the 1960s and 1970s.

In one of his letters to the director of relief ministry (today’s Patriots and Veterans Affairs Agency), he sends his condolences to the mother of a soldier who died on duty, offering to cover medical fees.

This incident highlights a dark side to Park’s tenure, the connection between authority and money. Many of his letters have a sentence like the following: “The enclosed expenses are not much, but I hope they are received with pleasure.”

One memo indicates that Park sent 30 million won ($19,107) to the Asia Policy Research Institute set up by former education minister Min Gwan-sik. And after Park’s assassination on Oct. 26, 1979, the new military authorities seized about 950 million won from the safe of the chief presidential secretary.

Park’s 1975 letter to his son Ji-man reveals yet another side: A man who grieves for the death of his wife, yet offers congratulatory words with hopeful, cheerful rhetoric to his youngest son.

“Dear Ji-man, the one I love the most! / Happy 17th birthday to my Ji-man./ Next year, you will become a senior, which means you will have to prepare for the university entrance exam. So be healthy [...]/ Do not forget that your mother also congratulates you on your birthday from far and she also wishes you to be healthy, as I do./ Once again, happy birthday./ Manse [Long live] my Ji-man!”

Park’s wife, Yuk Young-su, was killed a year earlier in an assassination attempt against Park when he was preparing to celebrate the nation’s independence from Japanese rule (1910-1945). Park continued his speech as his mortally wounded wife was carried out of the room.

Another highlight in Park’s letters is one he sent a day before his death.

“Life is, in fact, transient. Like the old saying ‘those who meet must part,’ we know that once we come, we must go,” Park wrote in a letter of condolence to the wife of Sim Ui-hwan, a senior government official who had died of liver cancer.

Perhaps, this was a premonition of his death just hours later.

He became Korea’s fifth president through a major military coup on May 16, 1961.

He is generally credited with ushering in the development of Korea with his massive economic revival plans.

But he also is criticized for his military dictatorship that lasted five consecutive presidential terms, repressing free speech, press and any political opposition.

On Oct. 26, 1979, Park was assassinated by Kim Jae-gyu, the director of the Korean Central Intelligence Agency and one of Park’s closest friends for a long time.