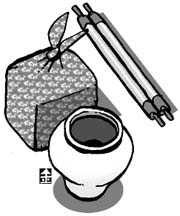 Liulichang is a famous district near Tiananmen Square in Beijing where antiques have been sold since the Qing Dynasty. When Korean scholars of the Joseon Dynasty visited Beijing they purchased books and paintings in this district.

Many of the shops remain from the old days and now welcome tourists.

The place is also known for another reason: People used to exchange bribes there.

In the late Qing Dynasty period, people had a very clever method of bribery. Those who needed to bribe high officials in Beijing loitered in stores. A quick-witted store owner would ask such a customer whom he wanted to bribe and how much money he was thinking of spending. The customer pretending to browse would give the name of the official and the money. The shopkeeper would then take his money and deliver the bribe to the official’s house.

At the official’s house, the owner of the store would buy an antique item or a painting equivalent in value to the bribe. He would then return to his store and pass it on to the customer. The bribe would be complete when the customer visited the official and returned the item.

It was a win-win deal for everyone.

The official pocketed a sum of money worth that of his treasured antique as a bribe. For the person paying the bribe, there is no risk of offering something the official wouldn’t be fond of. And the store owner happily earned a commission from his dealing.

During the Qing Dynasty, officials in local governments or ordinary citizens gave bribes to officials in the central government in the capital. They made these bribes in the winter or in the summer, or during traditional holidays or when they parted.

The word for “bribe” in Chinese bears the character “jing,” which ironically means “respect.”

Anyway, as this practice was common, bribes and antique items were circulated in Liulichang.

News reports have surfaced recently that police officers in southern Seoul had secret deals with owners of massage parlors and received bribes from them.

Upon hearing the news, one feels that there is no difference between the late Qing Dynasty, when bribery was commonplace, and present-day Korea.

The Seoul Police Agency said it would transfer around 500 police officers who have been working for some time in the same district in Seoul to other districts.

This is apparently the best solution the agency could come up with.

Those police officers who weren’t in on the take must feel it is unfair.

If the measure is meant to save the police officers who took bribes by simply transferring them to other districts, then the police are making an even bigger mistake.