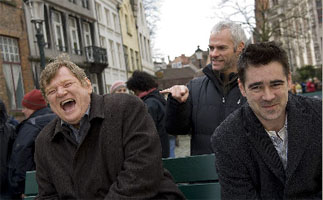 Ken (Brendan Gleeson) and Ray (Colin Farrell) are a pair of merry murderers hiding out “In Bruges.” [MovieWeb]

Colin Farrell’s unmistakable Irish brogue opens “In Bruges” with a sentiment that’s ever-present in the film: “I didn’t even know where Bruges f*cking was.”

Well, as he says in the next line, it’s in Belgium.

I personally only knew about the city because a girl in my high school class had a sweetheart living in Belgium. Once, during a school dance after-party, she pulled out an atlas, showed me a map of Europe and pointed out Bruges, which she mispronounced as “Broogz.”

“We’re going to go there and ride in a horse-drawn carriage over cobblestone streets,” she said with a sigh.

As the film depicts the city, that all seems quite possible. After all, it’s a “fairy tale town,” as described by Harry, a crime boss played by Ralph Fiennes, acting against type as an East Ender. The reason said villain is mooning over Bruges is because he’s sent two of his lackeys, Ray (Farrell) and Ken (Brendan Gleeson), there to hide out after a botched murder.

As it turns out, on Ray’s very first job, in the process of felling his target, he accidentally guns down an innocent little boy. And, as expressed by Harry, that’s against these criminals’ code: “If I had killed a little kid, accidentally or otherwise, I wouldn’t have thought twice. I’d killed myself on the f*cking spot... I would’ve stuck the gun in me mouth. On the f*cking spot!”

This fact isn’t lost on Ray, as racked with guilt, he’s dragged through the sights of Bruges by Ken. The result is an interesting play of gritty elements against picturesque surrounds, with a heavy dose of humor thrown in along the way.

Ray’s rather manic-depressive personality has a field day during his sojourn. At times, he’s curled up in his hotel bed, silently weeping. But within the span of a few minutes, viewers will see a swaggering Ray on the pull for a hot Belgian drug dealer (Clemence Poesy).

In case you hadn’t guessed by the film’s liberal use of the F word and its fugitive subjects, In Bruges isn’t for the faint of heart. But if you’re the type of person who can enjoy a laugh at the expense of obese Americans or a racist midgets you’ll likely enjoy the strong current of black comedy that runs through the film.

But before more gentle readers write off In Bruges as being “too loud or crass” (as Americans are described in one scene), allow me to make a case for the sheer cleverness of writer and director Martin McDonagh.

The script includes some sharp foreshadowing and plot twists, all the while peppered with gunfire and zinger lines. Then there’s the film’s theme of honor, which becomes all the more interesting due to its characters’ most dishonorable occupation. Who knew Colin Farrell could be moving?

It’s no wonder McDonagh received an Oscar nomination for best writing for In Bruges. The screenplay includes some neat continuity of seemingly random story lines, which all end up tying together in a tight, 107-minute package. The lack of loose threads here makes for surprisingly satisfying viewing.

Oh, and in case you’re wondering, the city’s name is pronounced “Brooj.”