Chillin’ on a southern shore

Chillin’ on a southern shore

Generally late winter or early spring is not considered the ideal season for taking a trip to the beach. 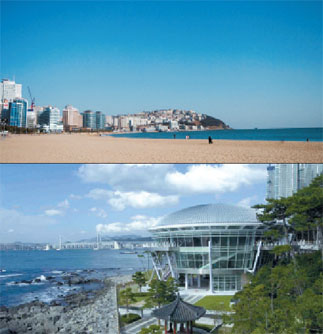 Although the mild weather reduces the need for winter coats, the wind blowing off the ocean is still bitterly cold and the water is too icy for even the briefest of paddles. Sure, flowers are blossoming and the birds are humming, but it’s no time to bust out the sunscreen. 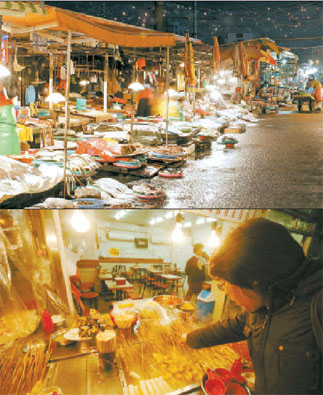 Top: An outdoor market in Giheung, near Busan.Above: A Busan street vendor sells spicy odeng, or fishcakes, and tteok, or rice cakes.

But the allure of the seas remains strong even during the winter months, with memories lingering from last summer of the soft sand underfoot, the gentle waves lapping against the shore and the soothing cobalt-blue skies.

Thanks to the latest in transportation technology, you can zip down to Busan on the high-speed KTX train in less than three hours, which is half the time it took five years ago.

The undisputed king of beaches in Busan, and perhaps much of the Korean Peninsula, is Haeundae, which lies on the eastern side of this southern port city.

Not only is this sandy stretch one of the top tourist destinations in the country, it has a hidden beauty that breaks out at this time of year.

As winter fades and spring hovers on the horizon, the empty beaches offer a meditative peacefulness, a far cry from the busy beaches of the summer months when so many people head here.

And as you stand in the wide open space of the beach and cast your eye over the vast ocean before you, a sense of calm descends. It is not uncommon for visitors to experience that sense of wonder that leaves you humbled and in awe of the majesty of Mother Nature.

Getting to Haeundae is simple since bus 1001 stops in front of the train station where the KTX deposits its cargo of tourists and drives up to the beach. The journey takes less than 30 minutes.

Also, the City Bus tour stops at major tourist sites in the city, and the tickets are sold at the train station.

When you alight from the bus, it takes just a few minutes before you are there in the sand, taking in a breathtaking view that resembles a Georges Seurat painting.

Yachts bob on the waters, couples picnic and families play a favorite game with their kids: seeing who can get closest to the waves as they slap against the shoreline without getting their shoes soaked.

If you need a change of scenery, a hiking trail snakes over the rocky cliff of nearby Dongbaek Island, so named because of the abundance of dongbaek, or camellia, that grows there. At this time of year, though, the shrubs are still bare and waiting to blossom.

Dongbaek isn’t technically an island anymore since a convergence of waterways have built up a bank of silt that has created a land bridge.

One of the must-dos here is to clamber along the wooden path built into the side of the cliff. The views are amazing, taking in the ocean vista and the spiky rocks below that burst out of the crystal blue ocean.

Some visitors might feel dizzy as they look down, so great is the height, but if you don’t suffer from vertigo, it’s well worth the effort.

Don’t be surprised if you see a bunch of fishermen perched on the rocks at the foot of the cliff, either. Although it’s technically illegal, this is a popular spot for anglers.

The wooden walkway leads to an observation platform and Nurimaru APEC House. This is where top leaders from the Asia-Pacific Economic Cooperation gathered for a meeting in 2005.

The house has been turned into a museum since then, and visitors will get to see what the heads of state ate for dinner and take a peek at the meeting room.

Another well-known beach in Busan is Gwanganri, which is close to Haeundae.

The atmosphere here is much livelier, coming alive after dark, unlike Haeundae, which tends to go to sleep when the moon rises.

The Gwangan Grand Bridge that stretches from one end of the beach to the other adds to the spectacle, especially when there’s a full moon and the scenery is brightly lit.

Here you can plump yourself down in a small modern cafe, order up a mocha latte and a freshly baked roti bun and watch the world go by.

Beaches are wonderful but Busan isn’t all about sand, sea, surf and sky. Haedong Yonggung Temple, located in nearby
Giheung, famous for its eels, lies on the outskirts of Busan.

Bus 181, which stops in front of Haeundae subway station, which is only a few minutes’ walk from the main beach, will whisk you off to this photogenic spot.

The temple was built in 1376 by the monk Na-ong, who was the mentor of King Gong-min. It is one of three holy sites in Korea where people worship the Buddhist goddess of mercy.

Over the past few years, the temple has become a popular destination for revelers wishing to see in the New Year with a bracing walk along the cliffs.

The first rays of the rising sun cast a surreal light over the crags and the waves crashing onto the rocks below.

There’s a small cafe here where visitors can warm themselves after an early morning constitutional.

Haedong Yonggung is definitely not your average Buddhist temple that appears on the cover of Morning Calm, the in-flight magazine for Korean Air.

In fact its very entrance is anything but calm. The various statues and red pillars look like the gates to an amusement park or a fancy Chinese restaurant.

Passing through the market where you can buy anything from drinks made out of black beans to bindaetteok, a kind of Korean pizza, visitors are greeted with a long line of animal stone statues, which represent the 12 creatures on the zodiac.

And at the entrance stands a huge tower where you can pray for safe driving.

Also, on the way to the temple is a small statue of a smiling potbellied man. Women who want to have a son rub the statue’s belly. There’s also a statue where you pray for academic achievement and 108 stairs that offer longevity, if you climb up. (The number 108 is sacred in Buddhism.)

Of course, these statues are modern and have no historical significance. Still, they put a smile on your face and it’s fun following the customs.

By this stage of the day, especially if you’ve scaled the 108 steps, you’re probably craving a plate of eel, and fortunately for you, Giheung is just a cab ride away. The restaurants serve up eel dishes that will satisfy even the most virulent of hunger pangs.

Before leaving Korea’s second-largest city it would be advisable to try out Busan’s distinctive culinary offering: odeng, Korean fishcake.

Busan odeng tends to be spicier and there’s even a tteok odeng, which is a skewered rice cake dipped in odeng soup, the perfect snack before you board the train back to Seoul, or wherever your next destination happens to be.