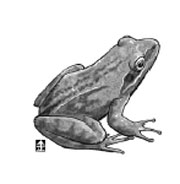 African clawed frogs were exported to laboratories around the world for use in pregnancy tests from the 1930s to the 1960s. The trials involved taking urine from a pregnant woman and injecting it into a female frog. The hormones in her urine would stimulate ovulation in the frog and within a few hours, the frog would spawn.

The problem is that some frogs escaped into the wild where they spread a resulting fungus, which can jump from one frog species to another. Chytridiomycosis, a highly infectious disease of amphibians, has caused mass amphibian deaths, as the fungus infects the skin of frogs and interferes with their ability to absorb water.

Many frog species are on the verge of extinction.

Besides the fungus, nearly 6,300 amphibian species worldwide have seen a significant reduction in their numbers, mainly due to the relentless destruction of the Earth’s wetlands. In addition, frog eggs are being impaired due to strong ultraviolet radiation leaking through the damaged ozone layer. Frogs and toads awakening in spring after their winter sleep must cross traffic-laden highways - posing a fatal threat to these species.

The number of frogs used for edible purposes is also a concern. Every year, hundreds of millions of frogs are eaten, and frog legs exported to France from Asia amount to some 4,000 tons per year.

Some Korean people are so eager to sample the delicacy that they break through deep ice in the depth of winter to catch sleeping frogs. People who catch and eat some species of frogs are subject to heavy punishment under Korean laws that seek to protect wild animals and plants.

Unfortunately, all our efforts thus far been have been in vain.

These days, frogs tend to be awakened from their winter sleep earlier than usual, due to global warming. However, we will likely see ever fewer frogs around this time compared to previous years, given the remarkable decline in the populations of amphibians.

The American scientist Rachel Carson in her book “Silent Spring,” wrote about her concerns on the mass deaths of birds and insects due to agrochemicals in the 1960s. Now, we are facing the tragedy of a “silent summer.”

Frogs can offer more to us than the familiar summer sound of their croaking. Their skin mucus can be used for various purposes, such as medical glue for damaged knee cartilage, mosquito repellent and diabetic drugs targeting insulin secretion.

We might regret this loss someday in the future. In fact, scientists are already mourning the extinction in the 1980s of Australian frogs that raised their offspring in their stomach. Were they alive, they might provide us with a clue to developing gastric ulcer medication.