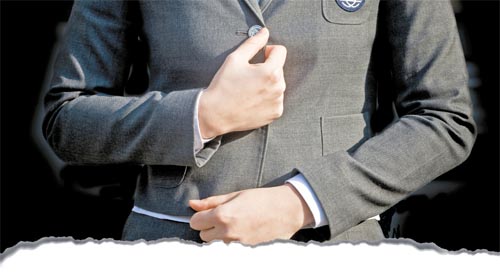 The start of a new school year is usually cause for celebration among parents as students are herded back to class, but things could be better for parents this year. One of the reasons for the dour faces is school uniforms.

Alarming sales tactics by uniform shop owners are causing problems, but parents are also concerned about overpriced uniforms and the marketing strategies of the big uniform manufacturers.

Police are investigating uniform shop owners in the Geumjeong district of Busan and other areas in the south over the hiring of bullies and juvenile delinquents to boost sales.

Late last month, five large middle and high school students entered a uniform shop in the Geumjoeong district of Busan, went up to the 26-year-old owner, Lee, threatened her, and demanded that she give them the cash deposited by the last 10 students who had bought uniforms at the store. After calling the 10 students, Lee was shocked to learn that they had all been threatened with “serious repercussions” if they did not cancel their purchases of certain brands.

Known as iljin in Korea, violent students are known to bully their peers for money.

Lee Won-ik (an alias) is a 13-year-old in his first year of middle school. He had his heart set on a specific uniform brand but changed his plans when he was threatened by a group of older boys from his school. “They told me that brand ‘A’ was poor in quality, and said that if I didn’t purchase a uniform from brand ‘B,’ they would make sure I was a wangtta (loner) at my new school,” said Lee.

According to a number of shop owners, such bully tactics, in which boys are paid commissions based on the number of uniforms they sell, have been used since last year. 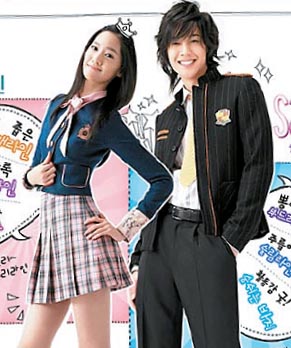 “One iljin is said to bring in better results than five salespeople,” said one shop owner in Yangsan, South Gyeongsang Province, in disgust.

Another method used by shop owners is persistent telemarketing by phone and text messages. Uniform manufacturers are also said to be using students to promote their products, promising concert tickets and discount coupons in return for online promotion of their uniforms.

Kim Si-hyun, a 16-year-old high school student in Seoul, was offered concert tickets in exchange for adding positive comments about one uniform brand to blogs and Web sites. She said she wrote as many as 50 comments a day but never received the tickets. “About 50 students from my school promoted the brand but not a single person got the tickets,” said Kim.

In recent years, the biggest concerns parents had about school uniforms were the high prices - a uniform set costs anywhere from 250,000 won ($162) to 700,000 won - and the marketing strategies of the uniform makers.

Parents were upset that big uniform brands were using teen idols such as the Wonder Girls, Girls’ Generation, and Big Bang, among others, in their advertisements, driving up prices. 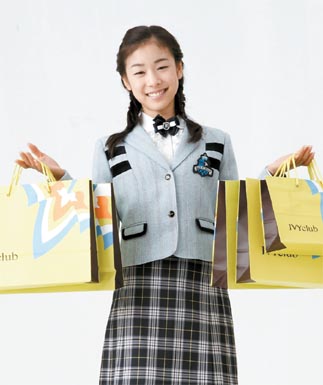 “The price difference is only natural and, contrary to what parents think, the cost of advertising is not as big a factor as they believe. The difference in price stems from the fact that smaller manufacturers do not use middlemen. A uniform priced at 200,000 won could increase by 20 to 30 percent as shop owners increase prices for profit. Other expenses and add-ons can further increase the price by four to five percent, and it can be higher for department store booths,” said Hur Jae-Myong, a member of the Ministry of Education, Science and Technology’s Student Guardians Team.

Parents also cite uniform alterations as another major problem. School uniform selection committees are responsible for all decisions on whether uniforms are worn as designed, but image-conscious students looking for the latest styles and the uniform brands that feature them are also thought to contribute to rising uniform prices. As students alter their uniforms, prices change.

According to an Ivy Club employee, Ivy Club and other brands took notice as girls started folding their skirts to make them shorter and boys began altering their pants for a tight-fitting look. “Boys in areas north of the river began altering their pants for a tighter fit, so we began to research what our consumers wanted. Students were becoming image-conscious and wanted to look slimmer in their uniforms, so we began designing our uniforms to match,” the staff member said.

Early last month, a civic group consisting of parents called Haksamo asked the Education Ministry to review the situation. The ministry reached an agreement with the major uniform makers late last month under which the brands will stick to the designs approved by the school committees and will not use any advertising.

Uniforms have been around for years but why all the fuss this year? The two biggest reasons are the recession and rising prices.

“Uniform prices didn’t go up in 2007 and 2008, but we saw an increase of about 2 percent this year. In response to parent complaints and the economic recession, we reached an agreement with the major uniform makers on certain changes. We will have to wait until the end of this year to hear about the changes from the schools,” said Hur.

“We will stick to committee-approved designs and all advertisements have been pulled. We won’t shoot any new print or TV ads, but will continue to use images of stars from previous shoots on our brochures. We are discussing our future marketing plans, and don’t have a definite answer at this point,” said a staffer at a uniform manufacturer.

As complicated as this sounds, it was not always this way. Starting with the government’s standardization of uniforms in 1969 through the early 1980s, there was uniformity when it came to school attire. Boys donned starched, jet black collarless jackets with name tags over the chest and matching pants, while girls wore black jackets with white collars and skirts that dropped to the knees.

A major change in March 1983 allowed students to wear whatever they wanted to school. However, schools asked that the uniform policy be reinstated on the rationale that it would be easier to control students and eliminate social distinctions. The government allowed each school and its corresponding uniform selection committee to make its own decisions starting with the second semester of 1986.

While the issue of eliminating social distinctions still remains, in the current situation, would it not make sense to free students from the burden of purchasing costly uniforms? 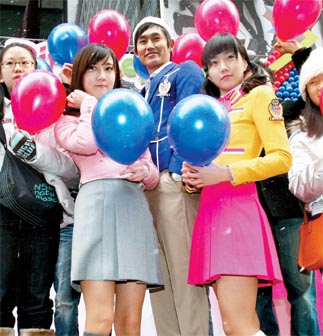 “It would definitely make our lives easier,” said Hur with a laugh.