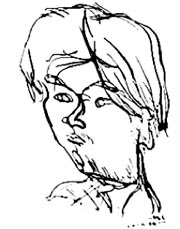 The young man with a heavy school bag smiled bashfully. The gray sweater with a hint of purple may have been the work of his sister. In the spring of 1979, Ki Hyung-do (1960-1989) was a hopeful wide-eyed freshman on the Yonsei University campus.

The name that later joined the ranks of the most influential Korean contemporary poets belonged to the youngest of a poor family earning a living from humble pig farming in Gwangmyeong, on the outskirts of Seoul. His father had been bedridden for 10 years after suffering a stroke. But his childhood nevertheless was rich with second-hand books. His dream was to become a poet. But in college he chose to study politics and foreign policy instead of literature to avoid one-sided knowledge.

Ki always got good grades and received scholarships. One of his college peers remembered his friend poring over books, underlining sentences in red, blue and black.

His friends frequented his room located next to a pig pen, despite the stench and the mosquitoes. His friends advised Ki to study for state exams guaranteeing safe government jobs. But instead in 1984 he became a journalist at the JoongAng Ilbo and the following year won a literary contest for another newspaper. On March 7, four years later, Ki was found dead in a theater, the cause believed to be a stroke. “A Black Leaf in the Mouth,” a posthumous collection of his poems, sold more than 240,000 copies.

His sister, Ki Ae-do, recalls that her brother had “ardently, intensely, almost completely lived his given life.” She added that he “possessed a delicate and kind heart, but at the same time a strong mind that ground and transmuted even rage into a beautiful and elegant song.”

But we celebrate his youthful life, not his passing away. He was helplessly poor, but made it into an elite college through ardent reading and effort, coupled with a boundless pursuit of knowledge. His muse and driving force to pull himself out from a painful reality had been his dream, not a desire for success.

What about college students today? They start from their first day on campus preparing for jobs. Parents, society and colleges also support this singular pursuit.

The dean of Korea Advanced Institute of Technology recently announced that his elite academy of science and technology will accept new students based strictly on their potential. He may be searching for eyes full of curiosity and eagerness to learn, like the ones that shone from the face of a 19-year-old poet 30 years ago.