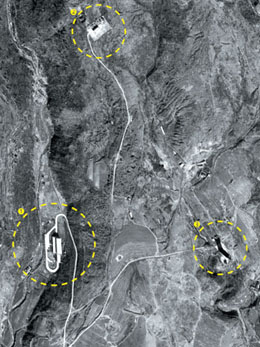 While North Korea has been in the international spotlight for weeks, and is trying to stay that way with a calculated missile launch, some experts are saying that South Korea’s own missile capabilities fall short when compared with those of the North. The argument has also been picked up by some military officers who say that the imbalance in the missile department needs to be addressed in light of recent developments.

There is a growing consensus in the military following a recent comparative study of the missile technologies of the two Koreas, which revealed that the gap is growing.

“After evaluating the missile firepower of both sides it has been concluded that there is a very serious disparity between South and North. The South’s missile capability is thought to be roughly 10 percent of that of the North’s,” said a military official speaking on condition of anonymity.

North Korea’s missile arsenal has also evolved over time, and now features anything from short- to long-range missiles. Among those, there are Scud missiles and Rodong missiles, organized into two divisions. One division is armed with 600 Scud-B and Scud-C missiles that have a range of 340 kilometers (211 miles) to 550 kilometers. The other division has 200 Rodong missiles with a longer range of 1,300 kilometers. In addition, the North may also have fielded a new intermediate-range ballistic missile with a theoretical range of 2,500 kilometers to 4,000 kilometers.

A senior government official said that this particular missile is aimed at U.S. military bases in Guam and in Okinawa, Japan, as U.S. forces stationed there are slated to bolster U.S. forces already deployed on the Korean Peninsula. “In that regard, the missiles are essentially a threat to the South,” said the official.

Opposing the North’s missile arsenal is South Korea’s Missile Command, which was established in October 2006. The command oversees the operation of Hyunmoo-2 and Hyunmoo-3 missiles and Cheonryong missiles.

Hyunmoo-2 is the first missile the country developed and went into operation in 1987. While the exact number is not known, experts estimate that about 500 of these missiles are currently deployed. Nevertheless, the missile’s relatively short range of 180 kilometers means that it is of no threat to the Northern capital of Pyongyang, even when forward deployed near the DMZ, where it is exposed to the counter battery fire of the North’s long-range artillery. That is why the K-3, also known as the Hyunmoo-3, was developed.

In the aftermath of what the North claimed was a satellite launch in 1998, South Korea became a member of the Missile Technology Control Regime and extended the range of its missiles, giving birth to the K-3. This missile has a range of 300 kilometers, of which about 100 are said to be fielded, according to sources familiar with the matter.

Nevertheless, even with this extended strike capability none of the missiles in the South’s arsenal are capable of reaching North Korean missile bases that are hunkered down in the northern region near the Chinese border or stashed in the mountains. That is why the South Korean military is employing about 100 U.S.-built Army Tactical Missile Systems, which have a near vertical attack vector, enabling the missile to hit targets in both mountainous or urban areas.

Still, the striking range is only 300 kilometers. In order to address the problem, South Korea is developing a cruise missile with a range of 1,000 kilometers or longer that is based on the K-3, but military officials interviewed for this article said they have yet to hear that the missile has gone into the mass production stage.

While the accuracy of Scud missiles has been a subject of scrutiny in the past, one thing on which Foreign Ministry and military officials agree is that the ability to mount nuclear warheads or biochemical weapons makes Scud missiles a grave threat to the nation’s security.

Observers say much of the imbalance in the missile department is due to a one-sided military policy weighted in favor of a defensive posture. “This is happening because there was little investment in offensive missile technology and the emphasis was placed on defensive missiles,” said Kim Tae-woo, a researcher at the Korea Institute for Defense Analyses.

The lack of offensive missiles has resulted in the country developing its own missile defense system, which is separate from the United States’ Missile Defense (MD) system. The Air Force introduced in November 2008 secondhand Patriot missile systems from Germany and is planning to field a battalion this year. It will have two full Patriot divisions in operation by 2010.

“These are old PAC-2 missiles, but they have been upgraded so they are on par with the newer PAC-3s,” said a military official declining to be named.

Military experts, however, are skeptical about the project, citing the PAC-2’s low intercept rate. The PAC-2 system destroys its target by closing in and then exploding the warhead nearest the missile. The spray of shrapnel from the explosion is meant to destroy an incoming missile. The PAC-3 uses a completely new intercept method called “hit-to-kill,” and its accuracy is far higher than that of the PAC-2 system.

A typical battalion of Patriot missiles has 48 launchers with 192 missiles. According to Korea’s Agency for Defense Development, three PAC-2 missiles were needed for each Scud missile in the wide open desert during the first Gulf War. This ratio cannot be directly applied in mountainous terrain.

Apart from the lack of hardware, officers also complain that current military training does not reflect the reality on the ground. “When we simulate a North Korean missile attack in the Battle Command Training Program, the Seoul area gets hit by a dozen missiles at most,” said a Defense Ministry official speaking on condition of anonymity. “Everybody knows missiles and long-range artillery are going to rain down and inflict maximum damage when the North decides to attack. Training needs to get real.”

All in all, such shortcomings have even been pointed out by Washington. In April of last year, General Walter Sharp, the top commanding U.S. general here said, “In the short-term, the Republic of Korea must develop a systematic missile defense solution to protect its critical civilian and military command capabilities, critical infrastructure and population centers.” As for Seoul’s ability to intercept a North Korean missile, the general said, “There is a significant shortage of PAC-3 missiles on the peninsula to counter the North Korean missile threat.”

Analysts say that what the country lacks has to be made up with an integration of South Korea’s missile defense system and the U.S. MD system. “During the Roh Moo-hyun administration the Defense Acquisition Program Administration nullified all procurement projects related to MD. That’s why the PAC-3 didn’t come. The dislike of Washington has resulted in the country’s current state of defenselessness against North Korean missiles,” said Yun Duk-min, a researcher at the Institute of Foreign Affairs and National Security.

The coming weeks have been targeted as the most likely time for Pyongyang to conduct a disguised long-range missile test, considering the North’s recent preparations and their timing, which has enormous political significance in the North. While Pyongyang is trying to cherry-pick the right moment to put itself high on Washington’s watch list, it is certain that Seoul’s initial reaction will be quite different from what it has been in the past.

Under the Roh Moo-hyun administration, which feared agitating the North when Pyongyang conducted a Taepodong-2 test in 2006 that ultimately failed, it was none other than senior government officials who argued that the test could have been a rocket launch for a satellite.