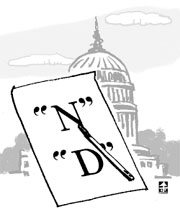 On June 12, 1994, the lifeless bodies of actress Nicole Brown and her friend Ron Goldman were discovered by neighbors. Bloodstained evidence pointed to Brown’s ex-husband, retired American football player and actor O.J. Simpson. But a California jury, consisting mostly of African-Americans, produced one of the more controversial “not guilty” verdicts in American court history.

What seemed like a simple murder trial turned into a racially charged contest after the defense built a case around the Los Angeles Police Department’s racial missteps, aided by a tape showing officer Mark Fuhrman - one of the first on the crime scene - repeatedly using a racial slur, “nigger.”

Simpson’s defense underscored Fuhrman was a known racist and may have tampered with evidence. With just one word - the “N-word” - and helped by the media frenzy that ensued, one of the most publicized and closely watched trials was decided.

The dreaded N-word has reappeared in newspapers again recently in a new form. The New York Times columnist Paul Krugman in January noted, as the U.S. government mulled billion-dollar bailouts for problem banks, that Washington was deathly afraid of the word “nationalization.”

Talk of nationalization became more widespread as more and more giant banks and companies cried out for federal bailouts to avoid bankruptcy.

To Americans, nationalization equates with socialism: an ideology that goes strongly against the American way.

Few people, let alone the government, would ever attempt to speak of nationalization in public and may have to resort to some euphemism.

But as the reality of the financial mess unfolds, the U.S. government inevitably has to buy majority stakes in problem banks like Citigroup. Naturally, conservatives jumped at the chance to hound the Obama administration, accusing “Comrade Obama” of trying to create an “American Socialist Republic.”

But with the economy staring into an abyss, the U.S. appears to have no other option but to keep the banks afloat with taxpayers’ money.

A myriad of data reveals the U.S. economy is in a perilous state, beyond just a normal recession.

Some bloggers and pundits are spurting out the taboo “D-word,” predicting a depression along the lines of the Great Depression may be around the corner.

Alfred Kahn, an economic adviser to former President Jimmy Carter, came under fire after using the word “depression’’ in a statement. He later pledged to substitute the word “banana” for “depression” in the future.

How wonderful it would be if doublespeak could solve the problem.

We wish the United States all the best in addressing the banana.