Oasis to show off its spiritual side

Oasis to show off its spiritual side

British rock band Oasis is coming to Korea to promote its new album, “Dig Out Your Soul.”Provided by the promoter

“The fans were crazy,” answered Noel Gallagher, the star guitarist with Oasis, when asked about the group’s impression of their 2006 Seoul concert.

That and no more.

The blunt, terse and devil-may-care style answers in our recent e-mail interview with the British rock band seem to embody the perfect, hot bad boy image many of us have associated with popular rock stars for years.

After all, Oasis is part of British pop royalty, following in the footsteps of legendary groups like the Beatles and Queen. And that take-it-or-leave-it attitude has become the band’s trademark. In fact, Oasis has previously claimed that they are better than the Beatles, triggering quite a stir among fans of the Fab Four. 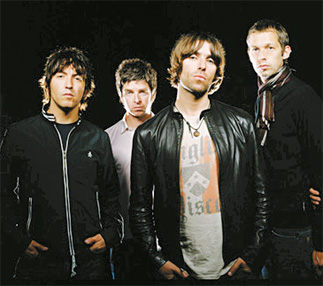 But it’s an indisputable fact that Oasis has raised the bar in the industry, renewing numerous sales records. Songs like “Some Might Say,” “Don’t Look Back In Anger,” “Whatever,” “Roll With It,” “Wonderwall,” “Stand By Me” and “Lyla” have become tantamount to national anthems.

In the latest headline about this reasonably proud quintet, the band’s promoter said last week that Oasis’ planned China debut had been canceled. The band was supposed to perform in Beijing on April 3 and in Shanghai on April 5.

The promoter says that officials within the Chinese Ministry of Culture have decided that the band is “unsuitable to perform for fans in China” after recently discovering that Gallagher appeared at a Free Tibet Benefit Concert in New York in 1997.

But luckily for Korean fans, Oasis will be performing as planned in Korea on April Fool’s Day. It will be their second visit to Korea in three years.

“Rock ’n’ roll is spiritual and pop music is all about money,” Gallagher said, when asked about the distinction between the two genres.

For those who would like to see the spiritual side of these stars who are rock ’n’ roll to the core, it’s a chance to be seized.

Here are some excerpts from the e-mail interview with Gallagher.

Q. The band has enjoyed great success in a career that has spanned 17 years. What grinds your gears about the music industry?

A. Everyone and everything.

Does huge success limit your ability to experiment on each new album, or does it bolster your confidence?

No. I just try to do what comes naturally.

Of all the gifts you’ve received from your fans, which one was your favorite?

An album called “There’s Gonna Be a Storm” by The Left Banke.

How do you feel about the persistent rumors about Oasis splitting up and rifts between the brothers? How does this affect the group?

It doesn’t affect it at all.

Where do you see Oasis 10 years from now? Do you still think you’ll be doing albums and touring?