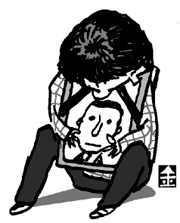 “Losing one’s father is like the sky falling down. I had not had that feeling until my own father passed away. But today I heard from a doctor that my child would not live long and I feel helpless sorrow and pain. Compared to this, the feeling of the sky falling down is still tolerable. I lost my two other children during the Korean War. Now, for the third time, I am experiencing that one’s feelings for his parents is still weaker than one’s feelings for his children.”

The text is from an essay titled “On Sorrow” by the Korean writer Yu Tal-young.

It is hard to grasp the bitter sadness that someone must feel following his child’s death, without experiencing it yourself. Others can only guess at it from books that have been written.

Contemporary writer Park Wan-suh wrote, “Thinking of the mother who keeps putting food into her mouth after having lost her child made me so sick that I felt like throwing up.” Park first lost her husband, then three months later lost her only child who was about to start working as a medical doctor. She cursed herself for not going crazy and retreated to a monastery for some 20 days “confronting God.”

Admiral Yi Sun-sin of the Joseon Dynasty wrote, “I should have died and you should have lived. This goes against the principle of heaven,” lamenting that he could not die instead of the child he lost.

Yun Seon-do, a Joseon-era poet, lost his second son. Afterward, he no longer enjoyed the fine breeze and the bright moon at night, which used to give him imagination and inspiration to write.

Things are no different for Westerners. The singer Eric Clapton lost his 4-year-old son in an accident. To forget the sorrow he turned to alcohol and drugs. It took him a long time to end his self-torture. His hit song “Tears in Heaven” described the pain and grief he felt.

A Korean father recently lost his child who was a police officer. The son died in the Yongsan protest incident. A father cannot think of anything but his son. Because of that, the father, a taxi driver, had two minor accidents.

Without saying who he was, he visited a place where people were burning incense in honor of the evictees who died in the Yongsan incident. He delivered his condolences to the families of the victims, saying, “I feel heartbroken to see the families sit here feeling helpless. My son Nam-hun at least had a decent funeral.”

It would be understandable if he had held a grudge toward them and thought them responsible for taking his son’s life. But he was concerned about them. His forgiveness and mercy humble us.

Thanks to him, another sentence from “On Love” rings true: “Sorrow gives humans power to cleanse their souls and create a lofty and pure world.”