Everyone’s a millionaire in Lee’s bestseller

Everyone’s a millionaire in Lee’s bestseller 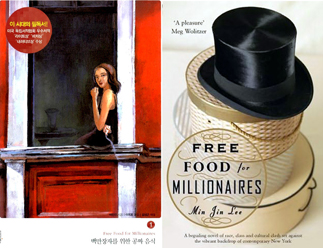 She was once cast in with that sea of would-be authors, struggling to find a publisher for her debut novel: a lengthy, dense work full of complex characters that might intimidate even the most voracious reader.

Now, people call her the “21st century Jane Austen,” and Lee Min-jin has become one of the few Korean-American writers to have their book translated into the language of their parents.

“Free Food for Millionaires” is a U.S. national best seller selected as a New York Times Editor’s Choice and for the Wall Street Journal Juggle Book Club. The book has been been among the top 10 best sellers in Korea’s “foreign fiction” list for several months.

The catchy title of the book, Lee said, came from a friend’s story. “One day, a friend told me a story about free lunches given at investment banks after a deal ends and sometimes the wealthiest employees were the first in line to grab a lot of free food. I thought this was ironic and funny: free food for millionaires,” she said.

“But as I wrote the story, I also wanted to make the point that I believe that we are all millionaires because each of us has been given original and invaluable gifts.”

Lee says the novel is somewhat autobiographical, but describes Casey - a lanky Princeton-educated 20-something in search for love and stability - as “much more interesting” than herself.

The eldest daughter of blue-collar immigrant Korean parents running a laundromat in Queens, Casey struggles to find the path that “seems fit for her” regardless of the options her expensive education provides.

Through the eyes of Casey and her friends and colleagues, Lee explores classism and Western prejudices against Asian women.

In one scene, Casey is invited to her male colleague’s apartment and is shocked to find pornography featuring an Asian woman and a white man.

Lee, 39, went to Yale University where she was awarded both the Henry Wright Prize for Nonfiction and the James Ashmun Veech Prize for Fiction.

She attended law school at Georgetown University and worked as a lawyer for several years in New York prior to writing full time.