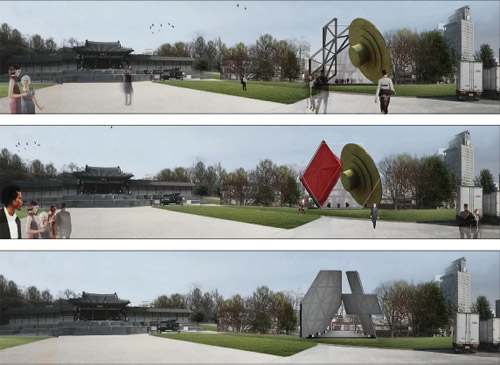 An artist’s rendition of Prada Transformer. Provided by Prada Korea

A transformer is going to land on the grounds of Gyeonghui Palace in central Seoul and stay there for five months.

No, it’s not the device used to transfer electrical energy or the robots in disguise from the recent Michael Bay film.

Rather, it’s a multi-interdisciplinary, shape-shifting pavilion for showcasing cultural exhibitions.

The design consists of a tetrahedron-shaped pavilion with a hexagon, cross, rectangle and circle on each side. 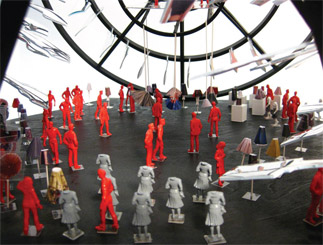 The interior of Prada Transformer.

It can house up to 200 people and massive cranes rotate the open-air building into place to create different spaces.

The organizers held a media briefing on Tuesday to introduce the architect Rem Koolhaas and the venue he’s designed, which will open to the public on April 25.

The first of the exhibitions will be “Waist Down - Skirts by Miuccia Prada,” which showcases the designer’s skirt designs from the past to present day.

The exhibition has been shown in Tokyo, Shanghai, New York and Los Angeles.

Prada Transformer will then be flipped to feature a selection of movies by the Mexican director Alejandro Gonzalez Inarritu under the theme “Flesh, Mind and Soul.” The exhibition starts on June 26.

Prada Foundation will also put on a show called “Beyond Control,” which will feature the work of notable contemporary artists.

The organizers said further cultural events and activities will be announced closer to the opening date.

Admission to Prada Transformer is free.

The exhibit will be open from Tuesdays to Sundays, from noon to 6 p.m. on Tuesdays and Wednesdays and to 8 p.m. on Thursdays, Fridays and Saturdays.

Gyeonghui Palace is located near Seodaemun Station, line No. 5, exit 4.