After an 11-year hiatus, Japanese rockers X Japan kick off a world tour this year that includes two shows in Korea this week. Provided by iYescom

Five heavy rockers with crazy hairdos, shocking fashion sense and thick eyeliner ushered in a new chapter in Japan’s music history in 1986 when they made their way into mainstream music.

The band’s lineup went through a number of transformations until 1997 when the group broke up.

A decade later, lead members Yoshiki and Toshi made plans to reunite. In March 2008, the four band members, excluding guitarist Hide, who died in 1998 in a suspected suicide, picked up where they’d left off. Still featuring the same attention-grabbing hairdos, freaky outfits and outlandish makeup, they staged their comeback gig at Tokyo Dome, where they’d performed their farewell concert 11 years before. 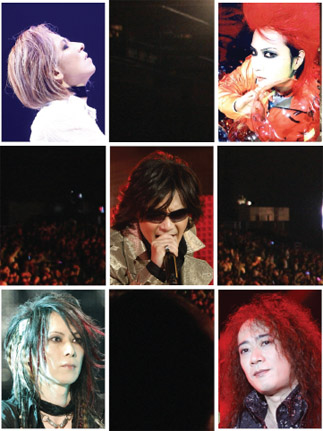 X Japan had, and has, a huge following in Korea. The band’s second album “Blue Blood” sold 500,000 copies here, which was quite a feat as the government banned Japan’s pop culture in the 1980s.

One of the hits, “Endless Rain,” is a perennial favorite for guys in karaoke bars.

And on March 21 and 22, X Japan will be performing in Korea for the first time, as part of a world tour this year that kicked off in Hong Kong in January.

“It’s been a decade, but we haven’t changed,” said songwriter Yoshiki in a recent e-mail interview. “We are not affected by changing trends in the music industry. In fact, we believe that the music we pursue will become a trend.”

He says one thing he hopes fans do not miss in this world tour is the theme X Japan has chosen for the concert and the story they are trying to tell.

“There will be colorful special effects on stage, but I always try to bring some kind of story to convey the dynamic side of X Japan,” Yoshiki said. “Like at Tokyo Dome last March and Hong Kong in January, there will be different themes for the two days.”

As of Monday, 73 percent of the seats for the group’s Korea concert have been sold.

Against this backdrop, Sony Music Entertainment Korea released a DVD of the 1992 Tokyo concert dubbed “Psychedelic Violence Crime of Visual Shock - On the Verge of Destruction” as well as a best-of album, “X Singles,” featuring hits between 1986 and 1988 such as “Endless Rain,” “Silent Jealously” and “Say Anything.”

According to Bae Yu-na of Sony, the DVD sold 1,000 copies and the best-of album 2,000 within just four days of its release on March 3.

“I always give my utmost energy and passion on stage,” said Yoshiki. “It’s going to be new and visual. You will be surprised.”