[Viewpoint] From the spectator’s seat

[Viewpoint] From the spectator’s seat 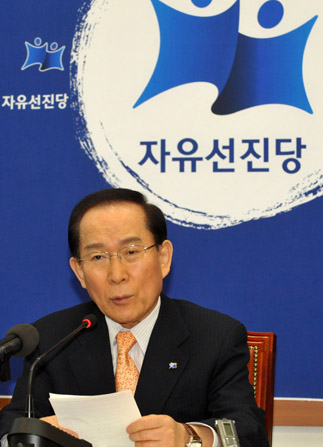 Liberty Forward Party leader Lee Hoi-chang is one of the few sensible and straightforward politicians these days. [NEWSIS]

Among all the politicians in Korea, the one person who speaks the most sense these days is probably Lee Hoi-chang, the leader of the Liberty Forward Party. Because his party holds only the third-largest number of seats in the National Assembly, his voice is often not heard loud enough, but what he says is straightforward and balanced.

When he attempted to run in the last presidential election after twice running in the past, I called the bid embarrassing ?? and I still think so ?? but the Lee of today is a completely different person from the Lee of the past, who used to behave like an emperor. Nowadays he gives skilled and multidimensional advice to both ruling and opposition sides.

Lee also criticized the prosecutors’ announcement of their investigation results on the Yongsan incident, saying, “The conclusion is unconvincing to the people because it finds no police responsibility.”

Lee accused the National Assembly speaker of “insulting his position by abusing the right to introduce a bill directly for voting; [while] originally intended to speedily move the bill forward, it instead delayed the process.”

Lee also condemned the ruling and opposition parties’ agreement to establish a “social discussion group” for media reform bills: “It is an unconstitutional idea to allow civic groups to exercise the legislature’s lawmaking right.”

At the same time, Lee scolded the Democratic Party for referring the National Assembly speaker to the ethics committee, saying “It is an act to destroy the legislature’s dignity.” Lee also said “it is inappropriate to politicize the Yongsan incident by demanding the appointment of an independent counsel or a parliamentary investigation.”

He also did not shy away from the “inconvenient truth” which both the Grand National and Democratic parties did not address [regarding the controversial media reform bills]. “The ban against ownership by a newspaper company of a broadcaster is nothing more than a relics of the Chun Doo Hwan administration’s media consolidation policy,” Lee said. “If the Chosun, JoongAng and Dong-A ilbos are biased, the broadcasters’ partiality were responsible for even more serious problems which affected the people’s thinking and actions.”

The president and North Korea also were not spared Lee’s sharp criticism.

When President Lee Myung-bak called the National Assembly’s violent clashes a “political crisis,” Lee Hoi-chang said, “I was told that the U.S. president is always making phone calls [to lawmakers], but I wonder how hard the Korean president had tried to persuade the legislature and the opposition parties and demonstrated a leadership of harmony.”

About North Korea’s threats, Lee said, “the only way to prevent a war is a strong countermeasure.” Lee said, “I want peace, but when the North initiates an armed provocation, we must counter it clearly and surely to silence the North forever.”

Everything that he has said thus far had been on target and straightforward.

Observing the changes, many said, “[Lee] would have become president a long time ago if he had changed in the past.”

What caused the change? What brought out Lee’s true nature, who used to be nicknamed “bamboo” for being righteous and unbending?

Guus Hiddink, who recently became the coach of the football club Chelsea in the English Premier League, may be able to provide an answer. Living up to his nickname of “magician on the ground,” Hiddink has continued to perform his magic by recording six straight victories and rescuing Chelsea from its slump.

The key to his magic is nothing special. He just watches a game from the spectators’ seats before coaching the team. From there, problems of the team that he could not see from the bench become apparent, along with the solutions. It’s the same thing as getting ideas for a game by sitting next to the players, instead of playing the game. From a spectator’s seat, Hiddink is able to see what had gone wrong in the past for his two failed stints in managing national teams ?? the Netherlands and Australia.

This demonstrates the value of a disinterested third party [similar to the role that Lee Hoi-chang has taken of late]. Many would say that he is making political calculations, but many in the public think Lee is right. Of course there are complicated internal matters and a complex web of interests, but why should the people care about that? The public has long been fed up with the wrong answers based on internal calculations.

What matters is getting things right ?? like Hiddink’s selecting Park Ji-sung for the Korean national team during the 2002 World Cup for his talents, without considering his background.

I hope the brand-new Lee preserves his current thinking for a long time. Then, he may be able to see a third opportunity.

But right now, I hope he continues to share his opinions with his rivals. If they can step back and look at what they’ve done, it will be a blessing for the people. For them, what Emperor Taizong of Tang Dynasty said will be helpful advice: “A wise ruler tries to improve after looking back over his shortcomings, but a foolish ruler conceals shortcomings and thus remains foolish forever.”