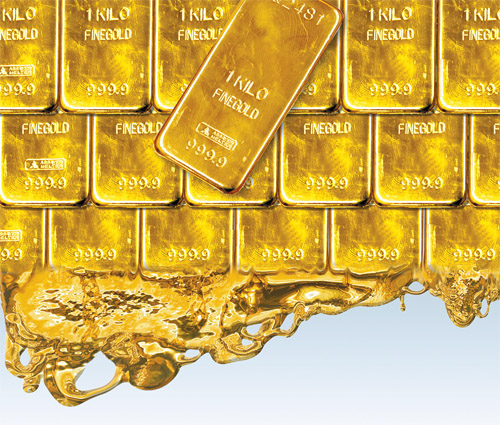 Skyrocketing gold prices recently prompted Park Jae-min, 41, into a spot of speculation. He began to wonder whether he should sell 10 gold rings, gifts he received six years ago for his child’s first birthday.

Park stopped by a jewelry store in his neighborhood in Jayang-dong, Seoul, to see about striking a deal.

Park is hardly unique. A lot of people are flirting with the idea of selling some of their gold possessions, which they have lying dormant deep in the drawers of their bedside tables. The temptation to make money by selling some items is too much for some to resist. 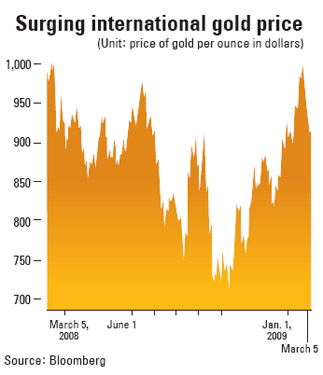 Gold prices have nearly doubled since this time last year, and Jongno District, central Seoul, where there is a high concentration of jewelry stores, is witnessing a surge of sellers.

What’s sad is that some people try to sell possessions that are highly valuable in monetary terms, but priceless in terms of emotional attachment.

Yim, 60, a jewelry shop owner who has run his business for 15 years in Jongno, remembered an old lady in her 70s who brought in a gold tooth a few days before.

She placed it on the glass table wrapped in some cloth. “She told me she’d run out of money for her living expenses,” Yim said. “The tooth was not worth buying because it was a compound metal that contained little pure gold. But I paid her 7,500 won because she looked so desperate.”

Yim said most people tend to bring in gold bracelets and rings to sell but as the economy has worsened, all kinds of gold articles, including combs and spoons, are winding up on his counter.

Heo, a 26-year-old college student, also visited a jewelry shop in the Jongno area. He sold two cell phone straps that he’d received as birthday presents from friends three years ago. Each had a small golden pig attached, which he sold for 180,000 won.

“I didn’t want to sell them but I needed money for the rent,” Heo said. “I came a long way from Suwon because I heard I can get a good deal here.”

Some people even go to pawn shops to sell their possessions. “Recently, an army officer brought in a gold ring that he was given when he got promoted to the rank of captain,” said Gong Young-hoon, a pawnshop owner in Jongno. “It is a little sad when people bring in things they cherish and say they’ll come back for them later.”

Kim Seon-young, another jewelry shop owner in Jongno, said sometimes more than 50 people a day come to sell their gold possessions, but hardly any buyers are waiting for them these days.

“Occasionally, there are couples who buy gold rings and other jewelry before they get married,” Kim said. “But many people seem to have cut down on their spending on jewelry. They choose a crystal ring instead of a diamond one to save money.”

Jewelry shop owners are unhappy because high gold prices are keeping buyers at bay. Some stores in Jongno are temporarily closed. “There are no buyers, only sellers, which is bad for business,” said a shop owner. “I can’t buy any more gold.”

Jeong In-gil, a jewelry shop owner in Jongno, agreed. “There is no business and I can’t even pay the rent,” he said.

The jewelry shops that still can afford to buy gold said they cannot pay much. “Taking into consideration wear and tear and our sales margin, the price we pay is naturally lower than what people expect,” said an official of the Jeweler’s Association.

Gold prices rose here because of surging international prices. Last month, gold reached $1,000 per ounce. Now it has declined to a little over $900. There is even a talk of new gold rush. In Alaska, gold mining is booming, and in the long term, prices could rise even further.

“People expect gold prices to go up,” said Lee Dong-yeop, head of a consulting agency, J&H. “People can wait a little before they sell gold if they are not satisfied with the price.”

Meanwhile, there is growing interest in investing in gold as people are looking for safer investments during the ongoing economic crisis. People can buy gold bars or coins, but they are very expensive and buying them is subject to tax.

Another way of investing in gold is “gold banking,” for which deposits are invested in gold. Unlike buying gold bars, gold banking is not subject to tax, commission and storage fees.


163,407
In tons, this is the total amount of gold excavated throughout history. This is a small amount compared to that of other metals like steel. About 32,000 tons, or 20 percent, of the total are held by central banks around the world. The rest is kept by companies or individuals in the form of jewelry and ornaments.

250
In tons, this is the amount of ore or rock that miners must dig up to obtain 1 ounce of gold. One ounce of gold is equivalent to the amount used to make a wedding ring. This shows how rare the precious metal is, and how much damage gold mining inflicts on the environment.

1849
This is the year the gold rush started in the United States. The California gold rush was set off by a tiny piece of gold found in a lumber mill in 1848. It took one year for the news to travel from California to the East Coast. That is why the actual gold rush began in 1849. Between 1849 and 1852, the number of people in California increased 10-fold to 250,000. Only a small number of people became rich because of the gold rush but it became a starting point for the West Coast’s development.

8,133
In tons, this is the amount of gold the United States holds, according to the World Gold Council, as of September 2008. The U.S. has the most gold, followed by Germany with 3,412.6 tons, and the International Monetary Fund is the third biggest holder with 3,217.3 tons. France comes next with 2,527.5 tons. Korea has 14.3 tons and is 55th in the world in terms of gold holdings.