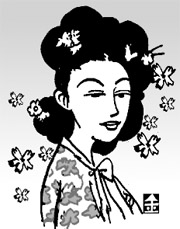 “I take a bit of a long night in midwinter and tuck it under the blanket of a spring breeze.” This sijo (a tightly composed lyric verse of three lines) by Hwang Jin-I is well-known among Koreans.

Hwang was a famous gisaeng, a female entertainer, during the Joseon Dynasty, who beguiled monks of high virtue and had a love affair with the Confucian scholar Seo
Gyeong-deok, contributing to the literary world of the Joseon Dynasty.

Hsuei Tao was a prominent poet and entertainer in Tang Dynasty China and was regarded to be as talented as Hwang.

Her name may not be familiar to Koreans but it would be surprising to know that the original lyrics of the popular Korean song “Dongsimcho” were written by her.

“Flower petals fall as wind blows and we don’t know when we will meet again.” The song is especially well known among Koreans in their 40s.

The Korean poet Kim Eok, the teacher of the romantic poet Kim So-wol, translated Hsuei Tao’s poem into Korean. The translation did not render the entire poem but took part of the original.

The lyrics and the nostalgic melody soothed the people’s troubled hearts in the immediate period after liberation from Japanese occupation.

“While two hearts fail to be connected, I just try to tie blades of grass,” the lyrics, translated from the original, describe how one longs to be with someone she loves.

Tao thought about marrying Yuan Zhen, a Tang Dynasty poet. She fell in love with the poet, 10 years her junior, but their relationship didn’t last long. It is not certain whether Tao wrote the poem because she missed Zhen, but there is a possibility.

Documents also show that other famous poets such as Bai Juyi and Liu Yuxi and many government officials who visited Sichuan where Tao lived socialized and exchanged poems with her.

She was also famous for producing her own paper, tinted with a hint of red, to write on.

The portrait of Shin Saimdang on the new 50,000 won banknote is controversial these days.

No one can be sure about what the mother of Yi I, who became one of the great scholars during the Joseon Dynasty, looked like. There is no record of her appearance.

As the portrait on the bill is different from the official portrait designated by the state, some claim the woman on the bill looks like a gisaeng.

Jin-i and Tao must feel it is unfair. A painting must be evaluated as a painting.

It is unwise to judge a person by one’s social standing or career.

It was some 2,200 years ago that the leader of the first rebellion against the Qin Dynasty, Chen Sheng, declared, “There is nothing like a specific heritage to become a nobleman.”