[Review]A film to move the heart, and upset the belly

[Review]A film to move the heart, and upset the belly 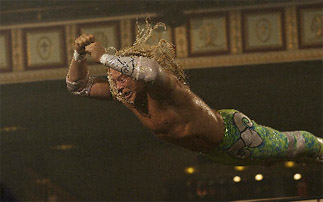 Mickey Rourke plays a worn-out wrestler, Randy “The Ram” Robinson, in the drama “The Wrestler.” [MovieWeb]

“The Wrestler” will likely incite two very different reactions, depending on who’s watching. The bleeding hearts among us will feel intense pity for the miserable characters onscreen - with bonus points if you’re a film buff who’s followed the arc of Mickey Rourke’s career. But less sympathetic viewers will point out one salient point: These people chose their paths.

That’s certainly the case when it comes to Robin Ramzinski, a professional wrestler with the ring name Randy “The Ram” Robinson (Rourke). Chasing fame, Randy has chosen to abandon his family, pump himself full of steroids and wreak havoc on his body in the ring.

Randy’s closest friend Pam also makes some bad decisions, stripping under the name Cassidy (Marisa Tomei). A single mom, her body and face are not what they used to be - and customers are taking note.

There is no dignity in their lives, a fact Cassidy’s all too aware of, but that’s lost on Randy as he continues to wrestle long after his star dims. Their seedy world, as depicted by director Darren Aronofsky, hits the viewer in the gut. The Wrestler is able to unite audiences, aristarch or sympathizer, with one word: yuck. What else is there when a man, so grotesquely disfigured by testosterone and past bouts, vomits bile onto a locker room floor and proceeds to pass out on top of it?

Aside from pure gross-out factor, this serves as Randy’s catalyst to retire from the ring. The scene, which occurs after a stomach-turning match that includes barbed wire, stapleguns discharged into flesh and shards of glass, represents the utter failure of his body. The incident leads to a bypass operation, after which the wrestler is told that he should hang up his tights.

Having lost his purpose in life, Randy redirects his energies toward the opposite sex, wooing Cassidy and reconnecting with his estranged daughter Stephanie (Evan Rachel Wood). Women provide Randy’s most meaningful interactions but also his most depraved. Without wrestling as an outlet, he craves admiration from females, and uses them as an outlet for pent-up physical rage.

The amount of T & A here is enough to make one feel bad not just for Cassidy, but also for Marisa Tomei the actress. Her performance borders on humiliation - and I say this without even touching another, even more degraded female in the film.

But real desperation for Randy comes when he’s left with neither wrestling nor women.

A friend staunchly on the critical side decried The Wrestler for its depiction of debased humans. But as the sap, I have to say it shows just how human - that is, prone to mistakes - people are. It just so happens these characters make mistakes with greater repercussions.

At one point, Cassidy cryptically quotes from “The Passion of the Christ,” then twirls some of Randy’s mane (which bears a strange resemblance to instant ramen noodles) and says, “You have the same hair.”

Herein lies the key to The Wrestler: For both Randy and Rourke, the film is an arena for atonement for past wrongs. And perhaps that’s why this film, though so sickening, can also be moving. Just not for everyone.