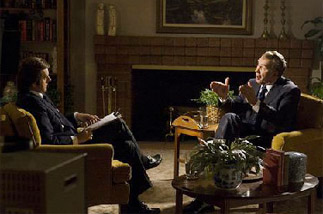 Frank Langella plays the disgraced president with depth and sensitivity in “Frost/Nixon.” [CINESEOUL]

There are few historical figures so important that they singlehandedly define the American relationship with government. But among them we must surely count Richard Nixon.

Underneath all its complexities, Watergate was a watershed because of one word: trust. Before Nixon, most Americans were inclined to trust their president. After Nixon, we could not. But behind Watergate is a tragic Napoleonic figure who believed, even in exile, that he still deserved another chance at absolute power.

The president’s last-ditch effort to accomplish this goal came in a series of interviews with British talk show host David Frost, broadcast in May 1977. These interviews are the subject of the play, and now a film, “Frost/Nixon” by Peter Morgan.

At the time Frost (Michael Sheen) was experiencing financial success, but also widespread criticism. His show in New York had failed to catch on, and (though not depicted in the film) he was regularly savaged by former colleagues such as John Cleese and Peter Cook, who called him a hack and a plagiarist.

So when Frost tries to sign Nixon (Frank Langella) for these interviews, even his best friend and producer John Birt (Matthew Macfadyen) laughs at him. One of Frost’s researchers for the interview (played by Sam Rockwell) worries that Frost will pitch softballs to Nixon and, instead of forcing him to admit guilt, end up exonerating him. (This is in fact exactly what Nixon hopes to accomplish.)

And the networks refuse to carry the program, so Frost must fund it entirely himself.

Of course, after much stonewalling, Frost forces Nixon to admit to the damage he has done to the office of the presidency and give up once and for all on his dream of a political comeback.

Langella’s performance, as a fighter, stubborn but worn out, who has been removed as leader of the free world and exiled in disgrace, is the definitive on-screen portrayal of this president.

It may be his long career as a supporting actor, never a star, that helps Langella bring out Nixon’s tenacity, even his charm, but with the palpable bitterness of what Nixon must have thought unrealized potential. These elements crystallize in a (fictionalized) scene where Nixon calls Frost late at night and his paranoia and egotism are laid bare - though we cannot help feeling sorry for the old man even he disgusts us.

Perhaps the acting connection is intentional, as Howard spends a great deal of time on cameras and screens. Television was the archenemy that lost Nixon the presidency to Kennedy - and so it seems almost poetic that it should also strike the final blow.