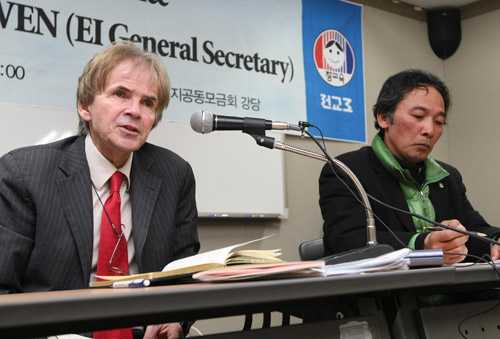 Fred van Leeuwen, general secretary of Education International, speaks at a press conference in Seoul on March 11, with a member of the Korean Teachers and Education Workers’ Union. [YONHAP]

When I was in high school, my teacher used to grow very nervous as the exam period approached. He would encourage and push the students to do better. The principal ranked and evaluated the classes, and the teacher in charge of the poorest performing class would be reprimanded. So when my class got the worst grade, my teacher made us stay late at school to study to do better in the next exam. Even though he gave us a hard time, hardly anyone complained. We all knew how much he cared for his students.

Those memories from 30 years ago came back to me when I became frustrated by the actions of the Korean Teachers and Education Workers’ Union. Union chairman Jeong Jin-hu has been on a hunger strike in front of the Blue House for over 10 days now. The protest’s biggest demand is to abolish the academic achievement assessment system. He is also calling for abandoning the policy of giving universities autonomy in admissions, to institutionalize the “Three Nos” policy - no university entrance exams, no high school ranking system and no admission for donations - by law and to abolish competition-oriented education. The union is rejecting the education policy of the Lee Administration altogether.

This is not the first time a leader of the teachers’ union has gone hungry. In April last year, the union’s former chairwoman Jeong Jin-hwa went on a hunger strike to protest the administration’s decision to abolish many school-related regulations. Another former leader, Jang Hye-ok, staged a hunger strike in 2006, opposing the merit-based bonus payments for teachers. Some expect the current head, Jeong, to last longer than his two female predecessors.

What is the Korean Teachers and Education Workers’ Union anyway? It is a labor union of teachers who educate elementary, middle and high school students. The union was formed on May 28, 1989, so it will be celebrating its 20th anniversary soon. The union began with about 20,000 members, reaching a peak of some 90,000 membership at one point; it had 77,798 members as of the end of 2008. Teachers pay 0.8 percent of their salaries each month as union membership fee. On average, each teacher pays 15,450 won ($10.50), and the union collects 1.2 billion won in fees monthly.

The union’s “True Education” principle was welcomed at first. The union worked to end school bullying and under-the-table gifts to teachers, eradicate authoritarianism in school and democratize education. It began with noble ideas, and it inspired once unmotivated teachers. But the teachers’ union has changed. It is hard to find a member who is passionately driven and devoted to the students. While there are many respectable teachers, the union is swayed by leaders who are immersed in power, ideology and political struggles, and the union seems to have forgotten its original identity as an organization of teachers.

Am I biased against the union? Union members call the current education system “crazy” and stage candlelight protests to denounce the government. They oppose teacher evaluation, arguing that teaching is “sacred” and should not be evaluated. They want to teach the best students and the poorest performing students the same way in the same classroom and think sharing bonuses equally is a virtue. Am I really biased in pointing out the contradiction in their arguments? Are their claims appropriate for a global era of intense competition?

I had big expectations for the union’s national council meeting on Feb. 27. It was held after the sexual assault scandal involving a high-ranking official of the Korean Confederation of Trade Unions, who allegedly tried to rape a female teachers’ union member. Some students and parents refuse to have a union member as their homeroom teacher. I believed that the national council, feeling a sense of crisis, would reflect and produce appropriate countermeasures.

I must have been naive to expect self-examination. The council did not even express regret over the sexual assault case, in contrast to its intolerance of similar incidents in the past. The teachers may have thought that their own faults should be hushed up. Instead of contemplating how to teach students better, the union was busy devising ways to fight against the government.

There was also more frustrating news. The union invited the general secretary of Education International, Fred van Leeuwen, on March 9?11 to report on the ill effects of the educational policies of the Lee Myung-bak administration.

Of 60 million teachers around the world, 30 million are members of Education International. Over 400 organizations from 172 countries have joined the organization. Diagnosing the differences among students, schools and regions through testing is standard educational practice and a duty of teachers. The union wants to report to the international community that the academic achievement assessment will ruin education, based on a case of fabricated scores.

Who does the union work for? Teachers exist to teach students; the fundamental role of a good teacher is to be a good educator. True Education can be considered successful when the union does not hesitate to release the list of its members, and students can proudly say they are educated by a union member.

*The writer is the education news editor of the JoongAng Ilbo.