A missed opportunity for a literary response to Seoul

A missed opportunity for a literary response to Seoul 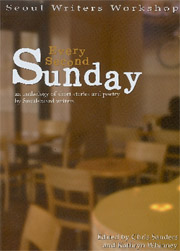 “Every Second Sunday” is an anthology of prose and poetry written by an expat group called the Seoul Writers Workshop.

Having been produced by a cluster of impassioned Seoul-dwelling writers, the book could have been a fascinating read.

To be honest, I was expecting adventures in a foreign land infused with the melancholy and joy of adjusting to expat living. Well, something like that.

I was at least expecting some kind of literary reflections on Korea. After all, the collection has been put together by a group with Seoul in its name.

Instead, this is a motley string of poems and short stories of varying standards, which ultimately is a pleasant but uninspiring read.

The collection might have worked better if there had been a theme, but, as co-editor Kathryn Whinney explains in the foreword to the publication, the concept was to give the writers as much room as possible to express their creativity.

Fair enough, but given the potentially rich material in Seoul and Korea for literary reflections, it was surprising that so many of the contributions were written within a non-Korean context.

Instead, while some of the contributions refer to life in Korea, such as Gwen Atkinson’s work, “It’s 2007 and I Teach English Now in Seoul, Korea,” “Ajuma Hiker’s Riddle” and “Like Jeollanamdo Like Normandy,” others were set in a variety of locales around the world, it seems.

One story actually starts, “It was another one of those cold, damp Melbourne mornings.” Another has Vietnamese connections and others take place, well, in a vague anywhere, everywhere. So there’s really no sense of location, which is disappointing, and, I think, a missed opportunity.

Take “Ten Foot Titans,” for example, a tale of childhood games and make believe. I have no idea where the story is set but if the same characters had been placed in a Korean context, the story could have been much more relevant to readers here.

Another criticism is there is no biographical information about the contributors. Despite what some literary theorists say about the author being dead, most readers like to know something about the writers. And even if the group decided against a theme for the book, the entries could have been edited in such a way that emphasized thematic connections and relationships. Otherwise, what you get is a hodgepodge of ideas, themes and styles without enough editorial structure. (And the font size should be the same throughout the book, copy editors.)

Being free to express yourself is fine in a workshop, but in printed form this loose approach could be interpreted as amateurism.

Proceeds from the book will go to the charities Moonbears.org and the Korean Sexual Violence Relief Center.

The writers’ group can be contacted through its Facebook page and seoulwriters@gmail.com.