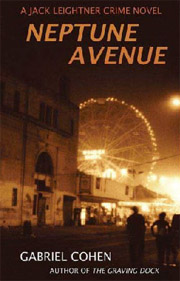 In “Neptune Avenue” by Gabrial Cohen, a murdered friend, a beautiful widow and the borough of Brooklyn loom large in this superb installment from NYPD Detective Jack Leightner.

As he lay recovering from a bullet wound in the chest two years ago, Jack Leightner yearned to compare notes with the man in the next hospital bed, who also had a bullet wound in his chest. Unfortunately, Daniel Lelo, a Russian emigre, didn’t like cops. To Daniel, all cops were cousins of the KGB, brutal and bent. Still, the victims’ shared suffering broke down barriers, and soon enough a friendship developed. Now Jack stares down at a murder victim on a morgue slab, hoping hard that it’s some other Daniel Lelo.

Daniel, he soon learns, had enemies in his hardscrabble Brooklyn community. Semyon Balakutis, rumored to be with the Russian Mafia, is an especially intriguing specimen, the kind of thug who uses terror as a marketing tool, and he and Daniel had been seen recently in intense discussion.Reuters