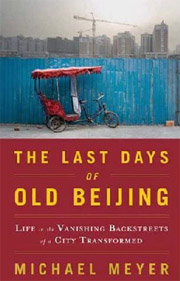 The Last Days of Old Beijing

Make no mistake about it, Michael Meyer knows a lot about China.

He’s fluent in Mandarin, he keeps his finger on the pulse of his small Beijing neighborhood and he’s well versed in the country’s past, from its ancient annals to current events. Nearly every page in his first book, “The Last Days of Old Beijing: Life in the Vanishing Backstreets of a City Transformed,” is packed with facts and historical context.

But Meyer’s real credibility comes from the fact that he’s walked the walk that his book seeks to preserve: the closely knit, communal lifestyle of the hutong, or the timeworn narrow alleys that “lattice the heart of Beijing,” as he writes. Renting part of a crumbling traditional courtyard home, or siheyuan, for a mere $3 or so a month, Meyer knows his subject intimately. And so he is able to write a detailed firsthand account of living in a central Beijing hutong in the years of massive construction leading up to the 2008 Olympic Games.

Within the first five pages, the author bounces from the opening scene of his landlord, referred to as “the Widow,” barging into his room in a sensory barrage of sight and smell, to a rather dense overview of hutong and his neighborhood, Dazhalan.

It’s immediate overload for the reader, switching between lines like, “Eat, Little Plumblossom!” and “Settled over eight centuries ago, Dazhalan - Big Fence - is the city’s most venerable community. The name dates back to the fifteenth century, when wicker gates on either end of the area’s hutong...” blah blah blah.

Meyer’s text is a sharp contrast to the comparatively light and breezy “Serve the People: A Stir-Fried Journey Through China,” reviewed earlier by this paper, which manages to incorporate a bit of history into a narrative that’s at least capable of holding a reader’s attention. Author Jen Lin-Liu is able to discuss the Cultural Revolution in some depth via her cooking instructor’s retold life story.

Meyer’s story, on the other hand, has too many players - his landlord, his co-teacher at the local elementary school, his shopkeep neighbor and so on - for readers to invest interest in any one character’s past. In fact, it’s hard to even invest in the author himself, as his personal narrative is continually interrupted by some treatise on urban development. When Meyer pulls theories from such minds as 19th-century Parisian civil engineer Baron Georges-Eugene Haussman and New York’s Robert Moses, his own voice disappears into a muddled chorus.

To his credit, Meyer does use his depictions of friends and neighbors to show a different side of China, especially when the media these days seeks to portray the country’s collective population as one big development-hungry pollutant eager to clinch the No. 1 position among the world’s economies. Rather, the residents of Meyer’s Red Bayberry and Bamboo Slanted Street fear the elusive “Hand” that marks hutong to be razed.

In his defense of the hutong way of life, Meyer writes: “Outsiders often called hutong neighborhoods slums, but the neighborhood did not cause pathologies or problematic behavior. Our neighborhood was not a pit of despair; you heard laughter and lively talk and occasionally, tears and arguments, just like anywhere else. ... I never saw drug sellers or passed-out drunks, as in the town’s upscale-bar areas.”

The author is not the most elegant writer, nor humorous in the least. For what he lacks, though, he makes up for in humanity. Save for gruff government officials, his portraits of Beijingers are affectionate and nuanced. But is The Last Days of Old Beijing a pleasant read?

I’ll say this: Based on its strong factual content, the book would make a tremendously enthralling textbook. But am I happy to put this one down? Yes.

The Last Days of Old Beijing: Life in the Vanishing Backstreets of a City Transformed