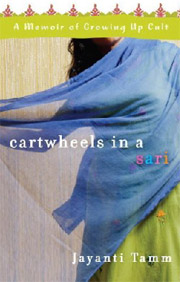 Cartwheels in a Sari

In “Cartwheels in a Sari,” Jayanti Tamm recounts the story of her childhood in a family dedicated to Indian guru Sri Chinmoy’s spiritual community in Queens, N.Y., beginning with her parents’ “divine marriage” in 1969.

Although intended as a celibate union, her mother soon became pregnant. Chinmoy determined that the child was a special soul, destined to play a privileged role within the meditation center. As a girl, Tamm’s life was shaped profoundly by this “myth of [her] birth” and by the unique status that it conferred on her. She recaptures her youthful struggles to understand the center’s secretive, emotionally repressive world, and to negotiate her relationship with the outside world of mainstream America, primarily experienced through the public-school system. Written in straightforward, unadorned prose, there are occasionally comic accounts of Tamm’s pre-adolescent sexual awakenings and of her dawning consciousness of the guru’s complex relationships with some of his nubile young disciples.

The author wryly reflects on Chinmoy’s strategies of manipulation and self-aggrandizement and provides sobering details of her mother’s late abortion and of the personal betrayal that caused Tamm’s exile to France and eventual departure from the community. Reuters