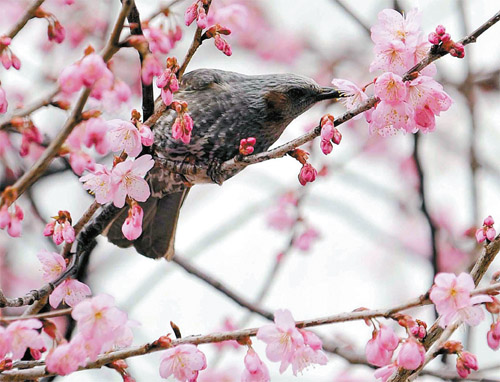 A brown-eared bulbul pecks at a cherry blossom tree in Busan. This year in the southern port city the cherry trees started to blossom on March 5 .

The spring blossom is already here with sightings recorded as early as late last month. We’re starting to see maehwa, or apricot blossoms, cherry blossoms, magnolia, cornus fruit flower and forsythia as much as two weeks earlier than usual.

Top: Maehwa, or apricot trees, in full bloom in Ulsan. Above: Apricot blossoms after a rainy day in Suwon. [YONHAP], [NEWSIS]

And early blossom means organizers of flower festivals are shifting up a gear in anticipation of visitors.

The annual Gwangyang Maehwa Festival kicks off today for nine days in Gwangyang City, South Jeolla. Visitors can expect to see over 300,000 apricot trees at over 150 apricot farms in Maehwa Village.

Maehwa has a special place in the heart of this country. The flowers represent fidelity and integrity, and have been lauded down the ages in art, verse and song.

“Apricot blossoms, along with orchids, chrysanthemums and bamboo are often referred to as the ‘four gentlemen’ of traditional art,” said Park Su-hee of the movable cultural properties division at the Cultural Properties Administration.

“The apricot flower has been admired not only for its beauty but its ability to blossom during the chilly early spring,” she added.

The biggest reason for the earlier than usual flower blossoms this season is an unseasonably warm February. 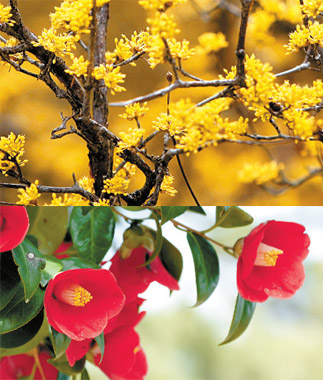 If you’re looking for a weekend activity in the city, the Cultural Heritage Administration is promoting visits to the five royal palaces in central Seoul in time for the flowering blossoms.

Ginger plant flowers are the first to bloom and you can start taking in the sights and scents of the spring foliage at Changgyeong Palace starting today.

In Gurye, South Jeolla, a celebration of sansuyu (cornus) fruit trees will be held at the Sansuyu Festival, which runs from March 19 to 22. 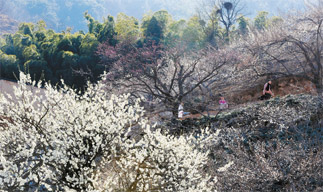 If apricot blossoms are the representative flowers of March, the following month is littered with cherry blossom festivals with seven festivals in Seoul alone. Although cherry blossoms have already bloomed in southern areas such as Busan, look out for various festivals starting early to mid April.

Onlookers take in magnolias in Daejeon

To get to Changgyeong Palace, go to Hyewha Station, line No. 4, exit 4, and walk for 10 minutes.