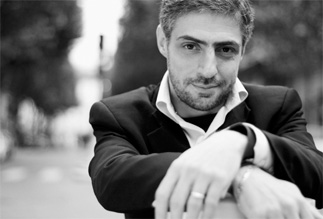 A young European jazz pianist Giovanni Mirabassi will perform at the LG Arts Center on Sunday.

He’s has been compared to artists such as trumpeter Enrico Rava and pianist Enrico Pieranunzi of Italy and Jan Garbarek of Norway, and he has built up a solid fan base in Korea following a highly regarded concert at Seoul Arts Center last year.

Mirabassi is a Paris-based musician born in Perugia, Italy, in 1970. He became well-known in Korea only a few years ago with his piano solo album, “Avanti,” which was released here in 2002. A series of his albums introduced afterward became hits in France, Japan and Korea.

After the Korean release of “Howl’s Moving Castle”, a 2004 Japanese animated fantasy film for which Mirabassi wrote the soundtrack, the pianist’s stock rose fast. The piece for the film was also on his album “Prima O Poi,” which he released in 2005.

In 2007, Mirabassi took part in the 4th Jarasum International Jazz Festival, performing in Korea for the first time. The Sunday performance will be his third performance in the country, after a show last year. The festival takes place in the summer on Jara Island, Gyeonggi. Mirabassi studied classical music when he was young, but he taught himself to play jazz after he was introduced to the genre by his father. Mirabassi is known to be heavily influenced by jazz pianist Enrico Pieranunzi.

Mirabassi played with legendary jazz trumpeter Chet Baker in 1987 when he was 17, when he became a full-time musician. He toured Italy as part of a group led by saxophonist Steve Grossman in 1988. In 1992, he settled in Paris. This was when he met other Italian jazz musicians based in the city.

In 1996, he took part in recording a Pierre-Stephane Michel album as bassist. He was also part of a Flavio Boltro album on the trumpet. Mirabassi obtained the top prize and the best soloist prize at the Concours International de Jazz d’Avignon, presided over by drummer and composer Daniel Humair. 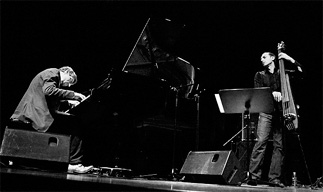 In 2001, Mirabassi recorded his first solo album, “Avanti,” which became an important milestone in his career. Because of the album, he received the Django d’Or and a Les Victoires du Jazz award in 2002. Alain Gerber of French music magazine The Diapason wrote, “Giovanni Mirabassi had the nerve and showed a lot of panache in tackling, so young as he is, such a repertoire … of revolutionary and patriotic songs, songs of resistance, struggle and refusal.”

The show at the LG Arts Center on Sunday will consist of two parts. Mirabassi plays solo for the first half and in a trio for the second. In the first part, he will perform songs from his two solo albums, “Avanti” and “Cantopiano.” In the second half, he will play pieces such as “Dear Old Stockholm” and “Alone Together” from his new album, “Out of Tracks,” which will be released in Korea this month.

Mirabassi will perform with drummer Leon Parker and bassist Gianluca Renzi at the LG Arts Center in southern Seoul at 7 p.m. on March 22.

To get to the venue, go to Yeoksam subway station, line No. 2, exit 7.