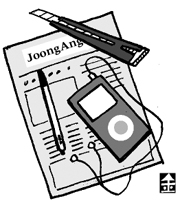 Working in a printing company, Yoshio Okada came to invent the snap-off blade in 1961, primarily out of necessity. At work, the major headache in his job of cutting paper corners was that the razor blade would become blunt too soon. One day he noticed a shoe repairman using a broken piece of glass as a cutter. The chocolate bars American soldiers broke off to hand out pieces to him and his friends in childhood days also fed his idea of designing a blade with a tip that could be snapped off when worn to unused sections.

Hungarian journalist Ladislao Biro often got frustrated spilling ink over his finished articles. He tried using viscous oil-based ink, but it was too thick to come out of his fountain pen. With the help of his chemist brother, Biro unveiled in 1943 the first practical ballpoint pen that uses a tiny metal ball bearing to push out ink.

British air force pilots were the first to use them. Some even say that Allied forces won the Second World War because pilots were able to accurately indicate their targets in map coordinates using the ballpoint pens while flying.

These inventions helped to change the lives of mankind because their inventors saw and thought differently about the use of simple items like a pen or a knife.

Allowing people or users easier access and interaction with systems and machines is termed User Interface, or UI, in telecommunications terms. Revolutionary UI often can outpace progress in technology.

The Wii game console marketed by Nintendo Inc. in 2006 added an entire new meaning to home video games. While its competitions were busy working on innovative game software and equipment, Nintendo came up with a wireless controller to allow a player to freely use the body to play the games. More than 50 million Wii consoles have been sold across the world.

The iPod is also a product of the UI concept. Apple Inc. discarded all the complicated functions of a digital music player to focus on the basics - sound and screen quality. The sleek, simple but bright-colored design that fits into a pocket soon became a major hit with young people throughout the world.

Apple CEO Steve Jobs underscored that what’s most important in making a new product was seeing through the user’s eyes. Innovation is possible when the manufacturer stands in the user position.

The JoongAng Ilbo has gone through a complete makeover.

UI evolution and revolution can change our lifestyles. Our readers no longer have to lay out the papers on the floor to read or inconvenience the person standing next to them on the subway. The new paper is designed to be read easily and comfortably. The print designs are vivid, and the articles break conventional rules.

We will stand in the forefront to breathe new air into the print media industry and hope all our readers will benefit from the change.