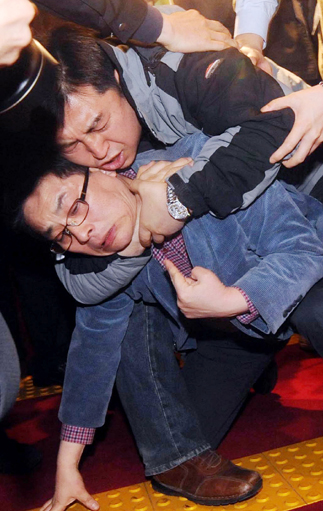 Lawmaker Cha Myeong-jin is attacked by a member of the Democratic Party in front of the National Assembly’s main hall on March 1. Cha suffered a broken arm in the scuffle. By Kim Sang-seon

Among the leading figures in the Grand National Party, there are around 10 people who were former opposition party members or student activists. Former lawmaker Lee Jae-oh, Gyeonggi Governor Kim Moon-soo, and National Assembly Representatives Cha Myeong-jin and Kim Yong-tae were all once members of the left-wing Democratic People’s Party.

Current Assembly Representatives Lee Sung-hun, Jeong Tae-keun, Lim Hae-kyu, Shin Ji-ho, Kim Sung-sik and Cho Jeon-hyeok had participated in student or labor movements. But of the GNP’s 171 incumbent legislators, it was Cha Myeong-jin who fought most passionately for extreme left-wing movements in the past.

Cha’s father escaped from North Korea and was not a learned man. Cha enrolled in the political science department of Seoul National University in 1979.

As soon as he sized up the mood on campus, he joined a left-leaning circle called the Economy Philosophy Society and fell deep into leftist ideological conscientization.

In October that year, the 18-year-long one-man rule of President Park Chung Hee ended with his assassination, but the hope of democratization was dashed by the cold wave of the new military junta that established the Fifth Republic.

Cha Myeong-jin was arrested by the Korean Central Intelligence Agency. Then he was conscripted into the army and sent to the mountains of Gangwon Province. After military service, Cha went back to school but, instead of devoting himself to studies, he jumped headlong into the labor movement.

While working for the welfare of laborers in the field, he heard about the labor leader Kim Moon-soo. Cha went to Kim and said, “Please be my leader. I will follow you in the labor movement.”

Since then, Cha became Kim’s shadow and started his career as a union activist. He organized workers at a steel tower factory in Bucheon, Gyeonggi, an electric cable manufacturing company in Juan Industrial Complex and Korea Optical Company in the Guro Industrial Complex providing support when they staged strikes.

When Kim founded the Seoul Labor Movement Union, Cha was one of the organizers. The union led a massive protest, in which workers as well as ordinary citizens of Incheon participated, on May 3, 1986.

The demonstrators demanded the overthrow of the dictatorship of the Fifth Republic, advocated for the rights of laborers, and burned the local headquarters of the ruling Democratic Party and police vehicles.

When Kim was taken into custody, Sim Sang-jeong, a former DLP legislator, assumed union leadership, and Cha helped her as a central committee member.

Cha met the woman who would become his wife while working for the union’s committee for reinstatement of dismissed workers. She was a Seoul National University graduate who joined the labor movement as a union activist three years earlier than him. She currently works at a senior citizens’ nursing facility as a social worker.

However, Kim and Cha started to realize the labor movement’s limits as the activities of the union grew weaker. The two decided to join the left-leaning Democratic People’s Party in 1989, but the party was defeated miserably in the 1992 general elections.

Although the DLP entered the National Assembly with fanfare by winning seats in the 2004 general elections, the reality of the barriers the left-wing had to face in 1992 were just too high to overcome.

Kim and Cha looked back on the road they had walked.

After the collapse of the Eastern European Communist bloc, they started to study the social democratic system as an alternative but came to recognize capitalism as a final destination after going through the maze of ideologies.

Recently, Cha, the former labor activist, recalled, “I reached the conclusion that the system that can expand political freedom and improve the quality of life for the laborers is free democracy and the market economy. The advice of professor Ahn Byong-jick of Seoul National University also had an influence on me.”

The two labor activists entered the “capitalist party,” the Democratic Liberal Party, which was the predecessor of the Grand National Party, and were elected into the National Assembly. Kim eventually handed down his constituency, Sosa District, Bucheon, to Cha.

On March 1, legislator Cha was attacked by a member of the Democratic Party at the entrance of the National Assembly’s main hall, breaking his arm.

The violent incident epitomizes the distorted political reality of these days.

It broke out in the course of an offensive staged by political progressives against the conservative Grand National Party.

The attackers should have broken the arm of the most rabid capitalist conservative politician they could find - someone who had no connection at all with the labor movement.

Why break the arm of a person who cared more about labor rights than the leading members of the Democratic Party and tried to prove his beliefs with actions rather than words?

The attack on Cha is emblematic of the misguided ideological struggles of today in Korea.

It seems that the progressives and ideologues are not willing to recognize the reality that the conservative and pragmatic forces have taken over political power and the National Assembly.

Legislator Cha’s arm will heal in time. But when will the ideological fracture of Korean society heal?