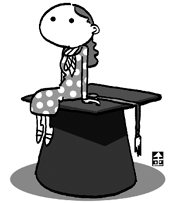 President Barack Obama once joked that he was thinking of calling off his campaign schedule when the movie “Sex and the City” premiered in spring last year. That’s how big a magic spell the four babbling girlfriends of the long-running television series had on its legion of loyal female fans across the globe. For years, women sympathized with the fabulous foursome in their vain quests for Mr. Right and their justified whining over the dearth of decent single men in New York. Every time, Miranda, the brainy one and the most hardworking of the gals, tried to hook up with a prospect, he quickly lost interest the moment she recited her resume: Harvard Law School graduate, large New York law firm associate.

The glittering stage that is real-life New York is no different. There too exists the conventional coupling mechanism. It seems a universal rule, based on educational and economic backgrounds, that men seek female partners who are slightly beneath them in status while women go for men deemed better than themselves. Under such a rule, the most competent women and the men in the lowest rung will be the least likely to find a suitable partner.

Research on singles by the National Pension Service is a testimony to the trend. Women educated beyond college and men whose formal education stopped at high school made up the lion’s share of the survey of singles aged up to 36. The 2006 census in the United States showed a surge in singles in their 20s and 30s. In the analysis, one of the reasons was a lack of men among college graduates. Women equipped with higher education were finding it harder and harder to meet equally formidable male partners. The trend applies to Korea as well. There’s bound to be “excess” women left single even if all male partners find a female partner among college graduates.

There are theories that Koreans are in danger of extinction if the country maintains its record of the world’s lowest birth rate - feared to dip below 1.0 children per household this year.

The solution lies in marriage. But we need two to make that panacea work. Statistics show that young couples tend to have more than one child despite the skyrocketing cost of raising and educating them. Single farmers have turned their eyes abroad to look for brides.

Finding a match isn’t that easy for the highly educated single ladies here. They cannot hunt for desirably formidable partners outside the country because they too are a rare species in advanced markets.

So let’s take Miranda as a role model. Being cool and rational, she had given up the idea of marriage and thought about becoming a single mom with the help of a sperm bank. But in the end, she chose mediocrity for happiness, starting a family with a sweet bartender.

In a post-feminist age, it is the women who must change and reinvent their way of thinking. It isn’t that easy to become a patriot, saving Koreans from extinction.