A passion for art in a New Collection

A passion for art in a New Collection 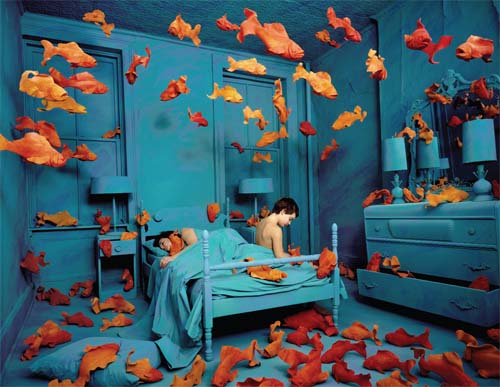 Sandy Skoglund’s ‘Revenge of the Goldfish.’Provided by The National Museum of Contemporary Art

The National Museum of Contemporary Art is unveiling a trove of the treasures it has collected over the past year. Entitled “New Collection 2008,” the exhibition is part of an annual ritual allowing the museum to share its new acquisitions, of which there were 212 last year.

The works being exhibited range from drawings to sculpture and are estimated to originate from the 1950s and 1960s.

Perhaps the most remarkable feature on display is the museum’s acquisition of two of Lee Joong-sub’s drawings. Lee is one of the nation’s most-beloved artists and is famous for his work “The Bull,” which was created following the Japanese colonial period in 1953-54. At the time, Korea was an agrarian culture and bulls were used to farm the land. Lee’s ability to vent his anger about life under colonial rule through his drawings of enraged bulls made him famous.

“With the acquisition of two of Lee’s drawings, our collection of his work has been jazzed up,” said Lee Kwon-ho, a researcher at Korea’s National Museum of Contemporary Art.

The exhibition also boasts a vast collection of photographs. The black-and-white prints of well-known modern Korean photographers, including Kim Il-chang and Kim Han-yong, provide clues to life in the ’60s and ’70s. Kim Han-yong captured images of Dokdo, the controversial rocky islets that Korea and Japan both claim as their own, as it was in 1953. Kim Il-chang’s “A Scene from One Market Day” shows a picture of an old man with a white beard on his way to a traditional market to sell his goat as he holds onto the animal’s leash.

New Collection 2008 also features drawings by foreign artists. American photographer and installation artist Sandy Skoglund’s “Revenge of the Goldfish” is visually flamboyant. She creates one of her characteristic surreal images by sitting amid a school of scattered orange goldfish.

New Collection 2008 will be shown in two parts: Part One through June 7 and Part Two through June 16-Aug. 30, at the National Museum of Contemporary Art, in Gwacheon, Gyeonggi, near Seoul Grand Park Station, line No.4, exit 4. The museum operates a free shuttle from the station to the museum. For more information, call (02) 2188-6000 or visit www.moca.go.kr/index.htm.