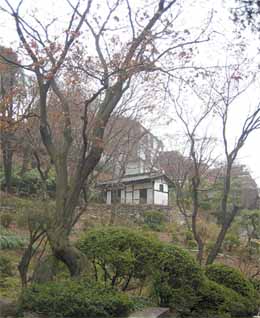 Someone once said, “Home is where the heart is.” On a recent visit to Ihwajang, where former President Syngman Rhee lived before and after his term in office in Korea, that proverb couldn’t have felt more right.

The garden was well maintained and the buildings, traditional hanok structures with slight modern modifications, were clean and in reasonable condition.

But once I entered the main building, which is used as an exhibition hall dedicated to the former president, a sudden chill rose up. The room was thick with the musty smell of old carpets and furniture.

“In my 30s, I left my motherland/ In my 70s I now have returned/ [...] Today I am home at last/ Yet a traveler still in my heart,” reads the poem “Returning Home” written by Rhee upon his homecoming after the end of the Japanese occupation on Aug. 15, 1945.

His presidency is still a source of political controversy. His supporters still hold him in high regard because he worked tirelessly overseas for Korea’s independence. His detractors, though, call him a dictator who cracked down on descendants of the royal family and communist sympathizers. 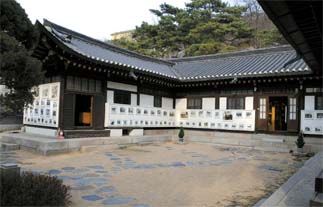 The main structure where Rhee lived.provided by Cultural Heritage Administration

“We are doing our best to keep the building in the best possible condition, but with a structure so old and funds so limited, it’s not easy,” said Kim Sang-nam, the superintendent who showed me around. “Maintaining the right temperature and humidity is crucial, but we try to minimize heating as much possible.”

The wiring is another problem apparently, and as I browsed the rooms along the narrow hall, Kim was busy turning on and off the 18 or so switches needed to keep the premises lit.

Ihwajang, also spelled Ehwajang, is located in Ihwa-dong, Jongno District, central Seoul. It was in the news earlier this month when the Cultural Heritage Administration said it plans to make this house a state-designated cultural property. If so, this would entail an upgrade in status, as the house is currently a city-designated monument - Seoul Monument No. 6, to be exact.

So does the upgrade mean better heating and wiring? Perhaps not.

“There won’t be changes in terms of the support given, like maintenance, restoration and tax benefits. It’s more of a symbolic gesture,” said Kim Su-jeong from the Seoul city government’s culture affairs bureau. “But it has a significant political meaning in that it’s no longer just a cultural property in Seoul but a cultural property for the whole country.”

“We’ve selected the six sites because all of them were important places [in Korea’s early years of democracy] and teach us something about Korea’s modern history,” said Kim of the Seoul city government.

But the descendants of those political leaders hope for more than just a promotion in title.

“The items and documents displayed are less than 20 percent of all the articles on Rhee,” said Jo Hye-ja, his daughter-in-law. “If they cannot provide us with more exhibition venues, they should at least build us a warehouse where we could keep them.”

This is not the first case of important presidential articles sitting in the dust.

Whereas parts of the former residences of Koo, Rhee, Yun and Choi have been made into exhibition rooms displaying relevant articles and documents for public viewing, Chang’s house has been undergoing restoration work ever since the Seoul city government purchased it in 2007.

And Park’s house is not being used for anything at the moment. There are reported to be 5,000 extant documents from his presidency, and Park’s memorial committee has been working for the last decade or so to build a memorial hall to exhibit them, but civic groups have obstructed the committee’s plans.

The problem is Park remains a highly controversial figure. He is credited with ushering in the development of Korea with his massive economic revival plans, but he is also criticized for suppressing free speech, the press and political opposition.

“It’s natural that Koreans find it hard to give an objective assessment of its former presidents,” said Lee Keun-jik from the cultural properties committee at the Cultural Heritage Administration. “Interested parties are still alive and people tend to get emotional.”

Ihwajang is less of a divisive issue, Lee explains, and there has been no resistance so far to the city government plan to turn it into state-designated property.

The residence has indisputable political significance. Ihwajang is not just where Rhee lived, Lee says, but also where he formed the first-ever cabinet of the Republic of Korea.

“Korea is a relatively young democratic country. So for now, we’ll have to settle at preserving places of apparent political importance like this,” Lee said. “It will take some time before Koreans can take a hard look at their former political leaders, and emotions shouldn’t get in the way of preserving history.”

But emotions and feelings do run high.

“No other president devoted his entire life for the independence and foundation of this country the way President Rhee did. That is the truth, the only truth,” Rhee said in a firm, indignant tone.

His father was forced to resign after the student-led April 19 Movement in 1960 and lived in exile in Hawaii until his death in 1965.

The Seoul city government has worked with Seoul subway and bus operators to install verbal as well as visual announcements in stops near the residences of former political leaders.

It has also set up signposts in nearby areas. Last year, the Seoul government launched a tour program of these houses. It plans to organize the program this year as well, once every quarter.

“We believe whether one was a good leader or not, records about them should be preserved in order to get a comprehensive assessment of them and of the time,” said Kim of the Seoul city government.

Last year, just 4,828 people visited the archives. “Beside a limited budget, accessibility is another issue,” said Kim Min-ho, an administrative researcher at the Archives, located in Seongnam, Gyeonggi, about an hour from Seoul.

The Archives did, however, launch an online service of presidential records late last year. It is also planning its first special exhibition some time this spring.

Asked about all the documents pertaining to presidents like Rhee and Park sitting in dust, Kim said it is the archives’ task to talk with the descendants and memorial committees of those presidents to acquire and centrally manage the items.