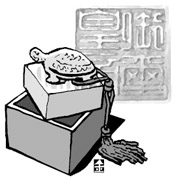 Chiang Kai-shek adopted a motto after he fled mainland China for Taiwan after being defeated by the Communist Party in 1949. It was an old saying: “Do not forget the Ju State.” Taiwanese who lived under Chiang’s rule are familiar with this saying.

In 1952 when he visited the Kinmen Islands which are very close to the Chinese mainland, the leader of the Nationalist government delivered this saying to troops at the military base there and it started to become well known.

The saying originated from an anecdote from the ancient Spring and Autumn period in China. Duke Huan of Qi, one of five rulers, was drinking with his ministers, including Guan Zhongzi and Bao Shuya, both well known for their loyal friendship. After a few rounds, Huan asked Bao to make a toast.

Holding his glass, Bao rose and said, “The lord shall not forget the agony that he has gone through as the prince of the Ju State and Guan shall not forget the hardship that he experienced in the Lu State.” Upon hearing this, Huan, who was then pleasantly drunk, quickly became sober, went down on his knees and bowed to Bao in appreciation.

The overlord must have been deeply moved as to bow to one of his ministers. Huan replied, “You ministers and I must not forget what the great teacher Bao said to protect our state from danger.” One wonders what kind of hardship Huan went through in the Ju State.

Under the rule of Huan’s predecessor, Duke Xiang, there was a rebellion in the Qi State. Huan was a prince then and was in danger of losing his life. With the help of Bao, the prince escaped the state and hid in the neighboring state of Ju. Huan survived in a miserable farmhouse there. The next year he managed to return home thanks to Bao’s help again and ascended to the throne. No details are known about the hardship he went through in the Ju State, but one can guess that he had many menacing moments.

As China’s history was full of war and natural disasters, it was important to prepare for possible danger. This is why they have many sayings about planning for emergencies while times are safe.

In Korea, the seal of state that Emperor Gojong of the Korean Empire had used has been unveiled. When the fate of the country was dim as candlelight in the wind, the emperor used the secret seal for state documents asking for support from other counties like Italy, as Japan was about to swallow our country.

Not only does the seal have value as a cultural asset but it also helps us imagine the long and dark crisis at the time on the Korean Peninsula. Present-day Korea is also in a state of crisis. It is time to once again lay our country’s foundation and prepare for potential dangers.