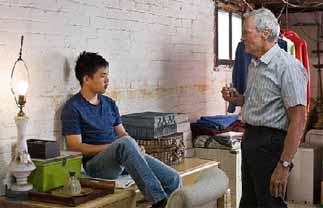 As “Gran Torino” opens, Walt Kowalski (Clint Eastwood) has just lost his wife to old age, and his adult sons sit in the pews at her funeral worrying about what to “do with him.” At first it’s an understandable question.

Kowalski never shed his prejudices or his guilt from fighting in the Korean War, and he’s one of the last white men left in a deteriorating Detroit neighborhood that’s been adopted by Hmong refugees, and invaded by gangs.

He’s a mean, bitter, racist old man who worked in a Ford factory for decades and only buys American. But he lives by his principles and is unflinchingly honest. The character is a stand-in for Eastwood’s generation of American men, and for the cliche of the eccentric old widower.

At one point Walt quite literally chases away a few Hmong gangsters, waving a shotgun and growling, “Get off my lawn.”

It’s easy to see why his family has difficulties dealing with this man. But they’re wrong to think he can’t take care of himself.

The car of the title is one Walt helped assemble himself, and it’s the catalyst for his first real interaction with his Hmong neighbors - when the teenaged Thao (Bee Vang) tries to steal it. Thao’s gangster cousin has bullied him into it, and to make amends Thao’s widowed mother and older sister Sue (Ahney Her) send him to work for Walt.

Sue, a self-confident and patient girl, reaches out to Walt, and the old man begins to come around to the fact that his neighbors are people - mostly because of the food they keep feeding him. At Sue’s prodding Walt becomes the father Thao never had, helping him find work, fix up the neighborhood and act like a man. In return Walt finds a new purpose and a way to make up for his sins in the war.

But this isn’t a saccharine drama about the “greatest generation.” This is a film about classic American manliness - and about the usefulness of personal strength and integrity in any age.

It teaches that to be a man is to endure suffering and insults and protect those you love without condescending to them.

It’s a brand of integrity that is macho but not misogynistic, the kind of stoic self-confidence that pervades the westerns of Eastwood’s earlier career, and the films he’s directed more recently such as “Flags of Our Fathers” and “Changeling.”

This brand of muscular, principled strength was once common in American films (and for that matter in Japan - just watch “Ikiru,” one of the masterpieces of Akira Kurosawa), but it seems to have disappeared along with the generation that lived by it. That he is able to share it so articulately cements Eastwood’s status as a national treasure.