Spiced-up tale of love lost and found in India

Spiced-up tale of love lost and found in India 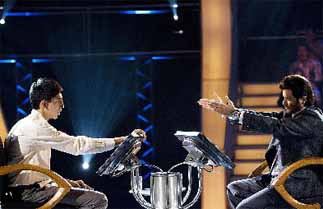 Jamal (Dev Patel, left) sets out to win more than just the cash prize when he appears on India’s “Who Wants to Be a Millionaire?” hosted by Prem Kumar (Anil Kapoor). [MovieWeb]

For the past few months, “Slumdog Millionaire” has been the movie to watch. The “Ragged Dick”-esque story cleaned up at awards shows, winning eight of the 10 Oscars it was nominated for, along with four Golden Globes and seven BAFTA Awards.

The soundtrack, which earned two of the film’s Academy Awards, has been a phenomenon in its own right. Laden with pulsing bhangra beats and M.I.A.’s cracking “Paper Planes,” it peaked at No. 4 on the Billboard Top 200 and No. 1 for Top Electronic Albums.

But along with praise, Slumdog has also attracted a barrage of criticism. Beyond the damning words on its sentimentality, controversy has erupted over issues including, but not limited to, the welfare of the film’s child actors, its depiction of poverty and even its use of the word “slumdog.”

Now, as Slumdog Millionaire rides into Korea on such a reputation, it’s hard to know quite what to make of it.

The film depicts the coming of age of Jamal Malik (Dev Patel), a product of Mumbai’s shantytowns. Our protagonist works his way up from his impoverished roots to becoming a middle-class chai-wallah, or office tea server, only to find himself a contestant on India’s “Who Wants to Be a Millionaire?”.

But for Jamal, the show isn’t just about winning money. His appearance on the program is his hail Mary effort to reconnect with his true love, Latika, played by the flawlessly beautiful Freida Pinto.

Director Danny Boyle is best known for grittier fare such as the heroin-laced “Trainspotting” and “28 Days Later.” The abject poverty of Mumbai’s slums is worse than anything in Boyle’s 1990s Edinburgh, or a Britain overrun with zombies, at least economically speaking. There’s a whole lot of tragedy in Slumdog, too - deaths and slashings and drug use abound. But those aren’t the prevailing images once the credits roll.

Instead, Boyle takes a cue from Bollywood and injects some shiny, happy images - and even a big, colorful dance number - into his film. The resulting “Bollywoodization” puts great emphasis on a joyful finale, with music to match. By putting viewers into such a state of mind, they can stomach (and excuse) the accompanying cinematic Velveeta.

While composing the score, A. R. Rahman sought to evoke the spirit of both new and old India, and the final product dovetails beautifully with its corresponding images as the narrative travels through a decade or so of the country’s development.

Plus, in these rather dreary economic times (sorry to drag business into the movie page, readers) Slumdog Millionaire’s feel-good vibe comes as welcome relief.

It’s nice, for once, to sit back and enjoy a pretty simple story and not feel like you’re poisoning your mind with the film equivalent of pop music. Shedding a tear or two on behalf of the film’s worthy protagonist is just too pleasantly cathartic to deny.

Viewers who can’t speed-read Hangul should check ahead with the theater to see if there are English subtitles for the film’s substantial Hindi portions. After all, Slumdog Millionaire is so great, there isn’t a line you’d want to miss.