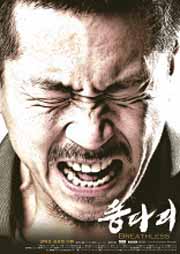 In the movie, Sang-hoon witnesses the deaths of his mother and sister as a child, and grows up hating his father.

Breathless is a very personal film for Yang as it is based on his experiences as a child. Yang directed, starred in, produced and wrote the script for the movie, competing against Japan’s “All Around Us,” China’s “The Shaft” and last year’s box office hit “The Chaser” from Korea.

Breathless opens in Korea in April.